Flight-testing of a series of aerodynamic upgrades to the Eurofighter Typhoon swing-role fighter that will increase its agility and ability to carry weapons has been completed by Airbus Defence & Space.

Designed under the Eurofighter Enhanced Manoeuvrability programme, the Aerodynamic Modification Kit (AMK) includes additional fuselage strakes and root extensions, which increase the maximum lift created by the Typhoon’s wing by some 25%, Airbus says.

Eurofighter test pilots from Germany, Italy and the UK completed 36 sorties from Manching, Germany, on the IPA7 Instrumented Production Aircraft, Airbus says, with the flight trials following some five years of studies. 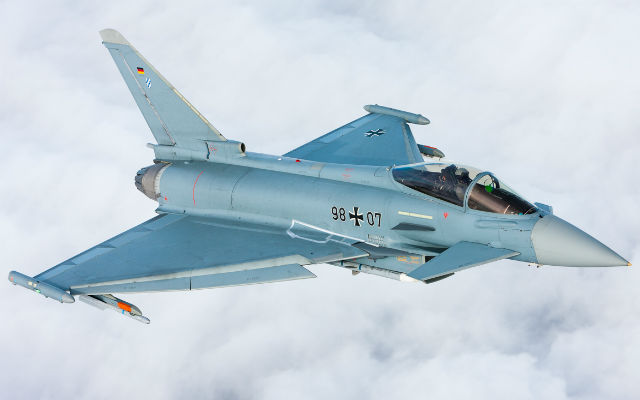 IPA7 during the trials

“We saw angle-of-attack values around 45% greater than on the standard aircraft, and roll rates up to 100% higher, all leading to increased agility,” says Eurofighter project pilot Raffaele Beltrame. “The handling qualities appeared to be markedly improved, providing more manoeuvrability, agility and precision while performing tasks representative of in-service operations.

“And it is extremely interesting to consider the potential benefits in the air-to-surface configuration thanks to the increased variety and flexibility of stores that can be carried.”