Airbus’s vision of an electric flight future is starting to shape up, with plans to build a final assembly line for its E-Fan light aircraft range in Pau, southeastern France.

The project, which was formally unveiled this time last year, will see an all-electric two-seater entering service around the end of 2017 or early 2018, with flight schools the likely customers. A four-seater, E-Fan 4.0, will follow; that concept, similar to many hybrid cars, features a kerosene engine “range extender” to keep the battery topped up.

Both aircraft are based on the twin-engined E-Fan prototype, pictured, which Airbus showed at the 2013 Paris air show and flew publicly for the first time at Bordeaux Merignac airport in April 2014. Chief technology officer Jean Botti sees the project as key early experience in design and industrialisation of an “E-Thrust” hybrid electric regional aircraft that, he insists, will eventually be offered by Airbus – though probably in a “2050s” timescale.

To achieve the 90-seat E-Thrust concept, Botti has said Airbus must harness vastly greater electrical power than either E-Fan demands – as high as 10kW/kg – and master the integration of a crop of technologies that fall outside the traditional turbofan supply chain.

The E-Fan assembly plant was originally earmarked for a site adjacent to Bordeaux Merignac. However, Airbus today says Pau was chosen for proximity to design partner Daher. Both Bordeaux and Pau are in France’s Acquitaine region, whose government is a keen financial supporter of the E-Fan project.

E-Fan is managed, designed and will ultimately be sold by Airbus subsidiary Voltair. 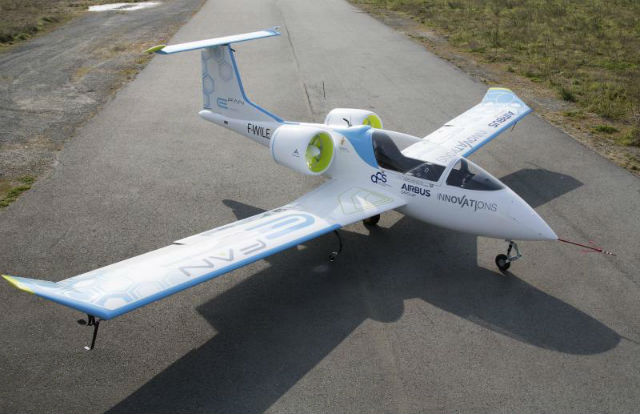