Airbus opened the $600 million final assembly and delivery center for the A320 aircraft family in Mobile, Alabama, to the international press for the first time on 13 September.

Although videos and photos are forbidden to be released until a public grand opening scheduled early on 14 September, a 90-minute tour revealed an almost exact copy of the company’s 'Hangar 9' final assembly hall in Hamburg, Germany, with still plenty of room to grow well beyond the plan to reach four aircraft deliveries per month from Mobile by the end of 2017.

“It signifies that Airbus is already a US manufacturer,” says Airbus chief executive Fabrice Bregier, speaking in a downtown Mobile hotel on a panel of company executives to reporters after the tour.

Two shipsets of A320 assemblies have already arrived in Mobile since June, filling two of the four stations in the final assembly. The first aircraft in assembly, a JetBlue A321, is approaching the Station 40 wing-to-body join within two weeks. The fuselage for an American Airlines A321 is sitting behind in Station 41. Both aircraft could fly in the first quarter of 2016, followed by deliveries beginning in the second quarter of next year. 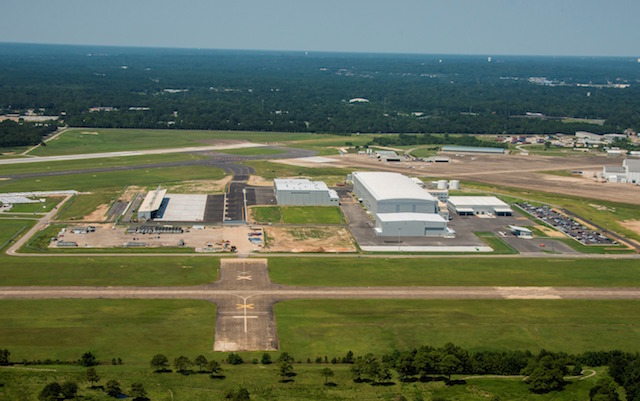 The production system is identical to the process used at the other three A320 assembly sites with one key change. Airbus is qualifying an automated drilling machine at wing-to-body join position, replacing a manual process to drill about 2,400 holes where the sections meet. If the automated system works, Airbus plans to retrofit the other A320 assembly lines with the same technology.

By the end of 2017, Airbus expects to reach the planned production rate of four aircraft per month, supplying hungry demand from US carriers for the twin-engined narrowbody and contributing a critical piece of a plan to achieve a monthly production rate of 50 aircraft.

Whether the Mobile site continues to grow beyond that point is still open to question, as a debate forms between Airbus executives in Europe and the USA.

There is no question that the Mobile site has the capacity to continue growing. With relatively minimal capital investment, such as adding shifts and building a new paint hangar, Airbus could double the capacity of the existing facility. Even the Honeywell-built power plant for the Mobile site is sized to support a monthly production rate of eight aircraft per month.

In Europe, however, Airbus executives are considering increasing the overall production rate of A320s to up to 60 aircraft per month after 2017. If such a ramp-up is needed to be achieved rapidly, Bregier says the quickest option is to create a new assembly line in Hamburg, negating the need to expand capacity in Mobile.

But Alan McArtor, chief executive of the US-based Airbus Inc., said in a separate interview that he disagrees that Hamburg would be the preferred option if a rapid ramp-up is necessary.

In theory, it would also be possible to increase A320 capacity beyond four aircraft deliveries a month in Mobile by decreasing capacity elsewhere.

Asked if such an option would be considered, however, Bregier was clearly uninterested. “Why would we do that?” he asked. The Mobile site was created to contribute to the production ramp-up, not offset capacity already in the system, he adds.

The grand opening of the Mobile line completes a 13-year saga with many twists and turns for Airbus. The south Alabama port was originally selected to house a completion centre for Airbus A330 aerial tankers, if the aircraft was selected by the US Air Force for the KC-X contract. Airbus also proposed to build commercial A330 freighters at the site, but those plans ended when Boeing the KC-X contract in 2011.

But then Airbus’ needs suddenly changed. The launch of the A320neo in 2010 and a five-year wave of commercial narrowbody orders drove Airbus to consider alternate production sites, with Tianjin and Mobile selected to supplement capacity in Hamburg and Toulouse, France.

Adjacent to a deepwater port and a seldom-used, 10,000ft (3,048m) runway, Mobile’s sparsely occupied Brookley Aeroplex always appeared attractive to Airbus. In addition to the current facility sprawling over 160 acres, Airbus also leases another equally-sized plot of undeveloped land on the size to accommodate future growth.

“Mobile is our industrial home,” McArtor says. “We have enough real estate under lease with the Mobile airport authority to expand. We have no direct plans. It certainly is a capability we can do in the future. It is not likely at all that we would try to find some other state to go to. This is our home right here.”