The next big civil battleground will be in the long-range twin category. Boeing's 787 "Dreamliner" was out of the blocks first and is selling well. Airbus thought long and hard about its response before coming up with the A350. Now the aircraft is ready for the market and the market has, so far, indicated it wants the first 90 copies. Airbus says that not only will it be a more than worthy rival to the Boeing 787, it's going to shoot down the Boeing 777-200ER. 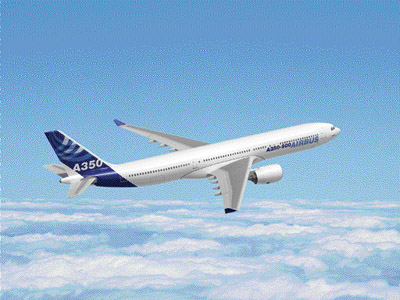 Airbus admits that it did not handle the early work to define the A350 long-range twin as adroitly as it might have done. But it says the first two models of the A350 represent an effort that was "worth the wait".

The aircraft will not only be a worthy challenger to the Boeing 787 but has been positioned to be a "Boeing 777-200ER killer".

It will have 10% commonality with its predecessor the A330-200, for years the market leader, but it is effectively an all-new aircraft, says John Leahy, Airbus chief commercial officer.

"This is the all-new A350," he declares. "People say this is a derivative aircraft. Give me a break! We decided to have a common cockpit with the A330. We will not give up a common type rating with the A330 because that is what the customer wants."

He adds: "For $5 billion, you get a hell of a lot more than a derivative."

He admits that Airbus is later coming to market than it would have liked but makes the obvious point that while the A330-200 has dominated the market, Airbus needed to know precisely what Boeing was offering before making a response.

"It has taken us a fairly long time to get the aircraft right," he says. "Sure, we could have announced it at the last air show but that would have been a derivative. Finally, last year we came out with an aircraft that we thought was pretty good but since then we have improved it further in three iterations.

"I was one of the first to say 'Let's rush in and get the aircraft out earlier' but the key is to get the right aircraft out at the right time and that is now what we have got."

Qatar Airways has gone for the A350, committing itself to order 60 aircraft, adding to pledges from US Air/America West (20) and Air Europa (10).

That "right" aircraft is two models, boasting an 8t weight reduction, increased use of advanced materials, all-new cabin and more seats than either of the two Boeing 787 models.

The Airbus team has achieved the major weight reduction through increased use of advanced materials, mainly carbon fibre reinforced plastic (CFRP) and aluminium-lithium. Advanced materials will account for 60% of the primary structures and the aircraft will have a CFRP wing.

Olivier Andries, head of the A330/A340/A350 programme, says: "A significant part of the fuselage is aluminium-lithium. This is a material that we have come to a point of maturity where we feel confident that not only will this give us significant weight savings, but we also see additional benefits over current materials in areas like corrosion resistance."

He adds that maintenance reduction is a key part of the design team's remit.

In technology terms, the A350 builds on the reliability of the A330 but also draws extensively on the A380 programme.

The new generation of engines to be used on the 787 programme, which offers 15% fuel burn savings, will also be used for the A350. An agreement has already been struck with GE (their engine will be on the Qatar Airways aircraft), which will supply the first engine for the A350, and talks are under way with Rolls-Royce.

The one area where the A350 really speaks its A330 lineage is in the area of the cockpit and systems.

Says Andries: "Our philosophy is based on the fact that the airlines have told us many times that they do not care for technology for its own sake. What they want is maturity and reliability and cost savings and weight savings.

"They also know that a move to new systems represents a risk to maturity and we have a target for a very high level of maturity at entry into service (EIS)."

The all-new cabin represents a "quantum jump" in terms of comfort and styling, he said. In the premium cabin there will be no centre bins. Seat cushions measuring 18in (0.46m) and mood lighting were upgrades taken from the A380 programme.