The deal has left Joby, which is developing an electric vertical take-off and landing (eVTOL) aircraft, with proceeds and cash of $1.6 billion, it says on 10 August.

“The proceeds are expected to fund Joby through initial commercial operations,” Joby says. 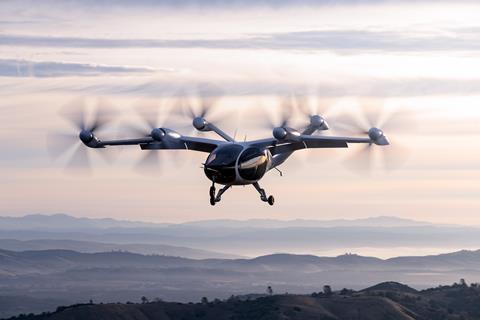 Based in Silicon Valey, Joby is working toward achieving certification of an eVTOL that it intends to use to launch air taxi operations. The company has also applied to the US Federal Aviation Administration for an operating certificate under Part 135 rules. It expects for its aircraft to be flying passengers by 2024.

Based on the transaction with Reinvent, Joby says its business is worth $4.5 billion. When announcing its go-public plan in February, Joby had pegged its value at $6.6 billion.

In February, Joby released a video of its five-seat eVTOL in flight. The aircraft will have one pilot and seats for five passengers, and range up to 130nm (241km) on a single charge.