In considering its options for a New Mid-market Aircraft (NMA), Boeing could ponder using an early design of a bestselling twin-aisle aircraft which was shelved a decade ago, in an effort to keep development costs low and execute on an accelerated timeline, one analyst says.

As the company reevaluates its plans around building an NMA, Addison Schonland, founder and partner of AirInsight Research, says the answer for the Chicago-based planemaker could be relatively simple.

“The 787-3 died a miserable death,” says Schonland at the Pacific Northwest Aerospace Alliance meeting in Lynnwood, Washington on 6 February. “What would happen if maybe the solution for Boeing and NMA is staring them in the face.” 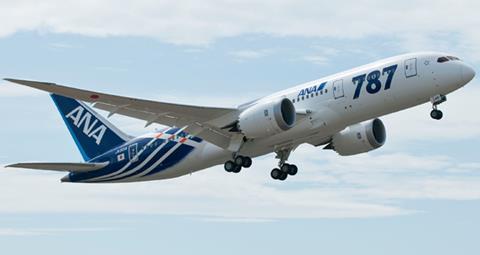 The short-haul 787-3, which was considered in the early 2000s for the Japan market but never really gained traction, was the precursor of today’s 787-8 and 787-9 Dreamliner models flown by 75 airlines.

“Boeing has a very good record of understanding how the 787 works - where its strengths are, how they can tweak it,” Schonland says. “What would happen if Boeing were to dust off that thing we called a 787-3, let’s tweak it, let’s take some weight out, let’s do some clever stuff with it, and maybe that’s our NMA.”

Industry experts agree that Boeing must move quickly towards making a decision on its NMA project in order not to lose time on offering a viable alternative to Airbus’ modern and efficient extra long-range A321XLR aircraft, which was launched in 2019.

For several years Boeing has talked of launching a clean-sheet NMA, an aircraft with about 270 seats and 4,000-5,000nm (7,400-9,300km) range. But the 737 Max grounding delayed that project beyond an ideal mid-2020s launch. As a result, Boeing is at risk of being left behind in the race to develop an aircraft that will be a viable replacement for the ageing 757 and 767, aircraft which will need to be retired soon.

Boeing chief exeutive David Calhoun recently put the brakes on the NMA as the Chicago-based planemaker continues to deal with the fallout from the year-long crisis. Calhoun says Boeing is reassesing exactly which segment of the market it should target with its next aircraft,

If Boeing does not launch a new programme soon, 757 and 767 operators, including airline heavyweights United Airlines and Delta Air Lines, which together currently operate more than 330 of those types, will have only the A321XLR to turn to expand existing transcontinental routes and create new intercontinental routes. United has already aligned partly with Airbus, announcing in December it ordered 50 Airbus A321XLR. Deliveries are scheduled to begin in 2024.

The 787-3 had meant to fly 290-330 passengers distances of 2,500–3,050nm. At the time, it was touted as the natural successor of the 757 and 767 fleets. Boeing received 45 orders for the variant from two airlines – ANA and Japan Air Lines. But in 2010 problems with the execution and construction led Boeing to cancel the programme and the airline customers to convert these orders to the more-modern and larger 787-8 and -9 variants.

Schonland says a new edition of the widebody 787-3 could typically start a flight cycle on the US West Coast, fly to the East Coast, refuel and reload, continue on to Europe, Africa or South America. “Maybe a revised 787-light would work.”

“By 2043… the market for this twin-aisled middle-market airplane will be 2,400 airplanes,” Schonland adds. “That’s a respectable number and it’s worth chasing.”

But convincing Boeing to go for a widebody at a time when more-efficient and lower-operating-cost single-aisle aircraft begin to outsell twin-aisle aircraft almost two-to-one will be a difficult sell, say other industry observers.

”There’s a long-term secular shift in favor of single aisles,” Richard Abioulafia, vice-president of consultancy Teal Group, says. ”The Max is a very serious situation for the business, but it’s also serving to mask what I think is the biggest challenge that Boeing has faced in many decades, which is that because of the Max, their ability to respond to this major secular shift in the market, coupled with a major competitive threat, is jeopardised.”