Boeing has said it expects to increase Max production to 31 aircraft monthly during 2021, but two analysts view a roughly 20-per-month rate as more reflective of demand.

Not all analysts share that view, but they agree additional rate cuts would further strain a supply chain that evolved for profitability at higher rates. 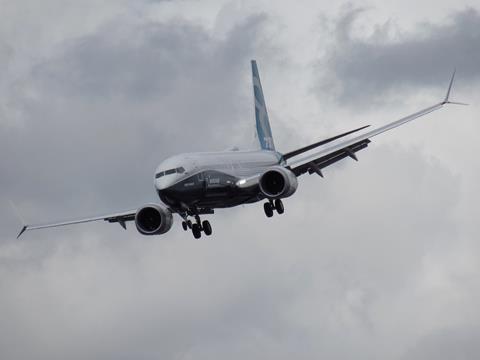 “Several suppliers have indicated that they don’t have confidence in the… outlook on rates from Boeing,” says aerospace analyst Michel Merluzeau at consultancy AIR. “There is a sentiment that Boeing needs to really come clean, to come forward with [realistic] rates.”

“I think it’s going to be lower than 31,” says Alex Krutz, managing director at aerospace and defence advisory Patriot Industrial Partners. “I think the production has to be at a lower rate, so that they can reduce their plane inventory.”

Boeing declines to comment about the 31-monthly rate. But earlier this month, chief financial officer Greg Smith said Boeing is “staying very engaged with customers around the globe to fully understand short-term and long-term requirements”.

“All of this is informing current and future production rates and any further adjustments as needed to balance supply and demand,” Smith added

Boeing could disclose more details about production when it releases second quarter results, scheduled for 29 July.

But Boeing faces the additional pressure of needing to divest an estimated 450 Max jets already in its inventory. The company produced but did not deliver those jets following the type’s March 2019 grounding.

The Federal Aviation Administration is moving closer to the Max’s certification, saying it will soon publish a proposed airworthiness directive. Boeing has said it expects certification will occur in time to allow deliveries to begin in the third quarter.

Krutz doubts that Boeing, at a 31-monthly Max production rate next year, will be able to deliver enough aircraft to also burn down its 450-strong inventory.

“I’m concerned that, even though they have a strong order book, they will continue… replenishing the inventory instead of burning it down,” he says.

Krutz concedes Boeing’s analysts may have determined 31 monthly to be a minimum viable rate, and says that perhaps Boeing will not hit 31 until the very end of next year.

Still, he views a “high teens to low 20s” rate as a sensible level that would allow Boeing to also work into its inventory.

“We do think it’s feasible,” he says of Boeing’s planned 31-monthy Max rate.

Bloomberg estimates airlines in the next year will retire as many as 5,000 narrowbodies – about one-third of that fleet. But, carriers will need to replace all those jets by mid-decade, at which time the industry should have returned to 2019 levels, Ferguson says.

To produce 5,000 jets in five years, Airbus and Boeing, each taking half, would each need to deliver an average of about 40 narrowbodies monthly.

Production of 30 Max monthly in 2021 “feels about right”, Ferguson says, adding that production could then exceed 40 monthly as the decade progresses.

He suspects airlines, at least those in the strongest financial positions, will want to take deliveries early next year so as to add capacity in time for summer 2021.

“If you are going to be in this business, you can’t just sit there and tread water forever,” Ferguson says. “The stronger ones will make a run at some decent capacity in 2021.”

He cites top 737 Max customers Copa Airlines, Southwest Airlines and Ryanair as carriers that will likely be eager to take aircraft.

Some suppliers, wary of Boeing’s estimates, feel “they have to take ownership of their rates”, says Merluzeau. “There is a feeling of disconnect.”

“Slowdown has a ripple effect through [Boeing’s] supply chain, which is far more vulnerable than they are,” he adds.

Krutz notes that during last decade Boeing shifted to its “Partnering for Success” supplier model, under which the airframer secured cost cuts while offering suppliers increased volume.

Suppliers, in turn, geared their businesses around higher rates, and signed high-rate contracts with their suppliers, onward down the chain.

With production now limping along, many suppliers find themselves saddled with excess raw materials, and with contracts to continue taking those materials at levels not needed, says Krutz.

“That’s going to be really the big problem in the coming months – the inventory bulge in the supply chain,” he says. “The break is hitting every couple weeks into a different part of the supply chain.”