Boeing has asked US regulators to approve incremental modifications to the 777 intended to address the risk of Pratt & Whitney turbofan blade-out failures, rather than requiring simultaneous certification of all changes, as it pushes for the early return to service of the fleet.

The airframer is developing several modifications to PW4000-powered 777s, including changes to inlets, fan cowls and support struts.

PW4000-powered 777s have not flown in service since shortly after a United Airlines-operated example suffered a blade-out engine failure in February. 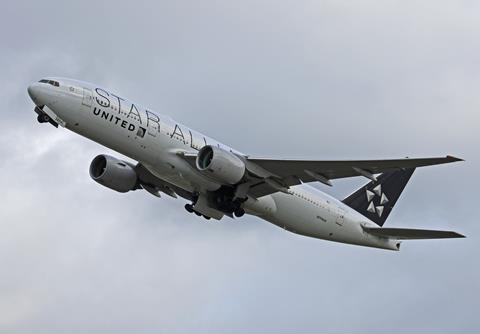 Incident aboard a United Airlines 777-200ER sparked the current

On 14 October, the Federal Aviation Administration (FAA) notified the public that Boeing had petitioned for PW4000-powered 777s to be partially exempted for five years from some powerplant-related rules.

“This exemption is required to allow certification and incorporation of the incremental changes as they become available to enhance safety and to meet the anticipated mandated compliance period of the planned airworthiness directives,” Boeing said in its petition to the regulator, dated 10 August.

“The exemption would… allow an earlier return to service of the 777-200 [and] 777-300 fleet powered by Pratt & Whitney engines” the petition says. “Returning these airplanes to service restores passenger and cargo air transport capacity which would be utilised to the benefit of the public in many ways.”

Airlines pulled PW4000-powered 777s from service after the United incident in February – the third such event. The FAA responded immediately by ordering engine inspections.

The jets remain out of service, though the FAA has not grounded them. The agency did not respond questions about Boeing’s exemption request. The National Transportation Safety Board (NTSB) continues to investigate the February incident.

Boeing “is working closely with the FAA, our customers and Pratt & Whitney to safely return PW4000-112-powered 777 airplanes to service,” the company says. “We have identified design changes and are working to finalise them, including a robust certification effort.”

The engine manufacturer says it backs Boeing’s proposed exemption request. ”We continue to support the ongoing NTSB investigation. We are coordinating all actions with Boeing, airline operators and regulators to support return to service of this fleet.”

Boeing’s petition requests temporary exemption from several regulations, including one specifying that “no single failure or combination of failures will jeopardise the safe operation of the airplane”. Others relate to engine support structures, vibrations, engine acceleration and rotation.

Meeting one rule requires meeting the others, Boeing writes. “A fully compliant design requires simultaneous certification of all changes”.

Boeing says its fixes are complex and will not be available simultaneously. “Without an exemption, full compliance for the [fan-blade out] condition would require incorporation of all Boeing and Pratt & Whitney service bulletins at the same time,” the document says.

Boeing requested a similar exemption – but for seven years – for its 737NG. That move stemmed from two incidents involving fan blade failures of the CFM56s equipping Southwest Airlines 737-700s, the most recent of which took place in April 2018. Boeing is working on changes to the 737NG inlet, cowling and primary exhaust nozzle.

The PW4000 and CFM56 failures involved the release of fan blades, which damaged components surrounding the engine, causing inlet structures and fan cowls to break apart. In the case of the 2018 Southwest incident, a component slammed into the side of the jet, breaking a window. A passenger died after being partly sucked out of the aircraft.

“Working closely with the FAA, CFM and our customers, we have asked the FAA to allow incorporation of a series of design changes to the 737 engine inlet, cowling and primary exhaust nozzle as they become available in order to further enhance safety,” Boeing says.