Order cancellations and the Russia-Ukraine war are among factors cited by Boeing as leading it to strip more than 140 aircraft orders from its backlog in March, leaving the company with negative order activity for the month.

On the positive side, Boeing landed new orders for 53 aircraft last month, though the company has still not resumed deliveries of 787s, Boeing says on 12 April. 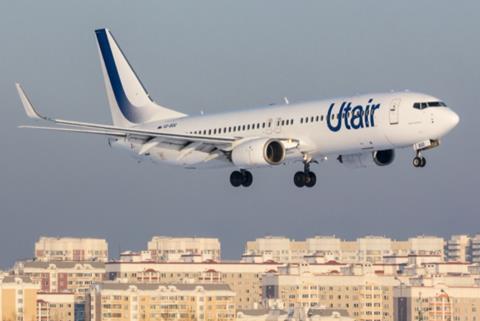 More significantly, Boeing in March stripped from its backlog another 152 orders because it doubts those deals will ever translate into actual deliveries. Boeing shifted the orders into a special accounting bucket reserved for uncertain sales called “ASC-606”.

Boeing frequently moves orders into ASC-606, though typically not so many. It does so based on factors that include the financial condition of buyers.

But another factor was apparently at play, with Boeing citing “geopolitical events or related sanctions, such as those imposed by the current Russia-Ukraine conflict”.

Boeing does not disclose additional details about its ASC-606 adjustments, but backlog data shows that two Russia customers hold outstanding orders for a combined 34 jets. Those include UTair Aviation, with orders for 28 737 Max, and air cargo company Volga-Dnepr UK, with orders for six 777Fs.

Buyers of another 31 Boeing orders have ties to Russia, Cirium fleets data shows. Specifically, Timaero Ireland holds orders for 17 737 Max that are to be operated by Russian lessor VEB-Leasing, while SB Leasing Ireland has orders for 14 737 Max assigned to another Russian firm, Sberbank Leasing, according to Cirium.

Boeing did land notable new sales in March. Those included new orders for 47 737 Max, among them 32 jets ordered by lessor Air Lease, 14 ordered by unidentified customers and one Boeing Business Jet (BBJ), also ordered by an unnamed buyer. Additionally, Boeing took orders for six 777Fs from DHL in March, it says. By comparison, Boeing landed orders for 82 new jets in February.

Boeing delivered 41 aircraft in March, including 37 737 Max to customers including 777 Partners, Aeromexico, Air Canada, Alaska Airlines, Air Lease, Bain Capital Griffin, BOC Aviation, Dubai Aerospace Enterprise, Flydubai, Korean Air, Oman Air, Ryanair and Singapore Airlines. It also delivered one 737-700-based BBJ to an unnamed customer, two 737NG-based P-8 surveillance jets to the US Navy, one P-8 to South Korea’s Navy, one 767F to FedEx, one 767-based KC-46 tanker to the US Air Force and one 777F to China Airlines, according to Boeing.

Boeing has delivered 353 737 Max since resuming deliveries in December 2020 following a 20-month grounding, it says.

Story updated on 12 April to clarify details about jets in the ASC-606 bucket.