The Atlanta-based airline, a major Airbus customer, will help Airbus by identifying operational and infrastructure requirements for such an aircraft, Delta says on 17 March.

“Delta will provide the expertise of its people, to identify fleet and network expectations and the operational and infrastructure requirements needed to develop commercial aircrafts powered by hydrogen fuel,” says the airline. 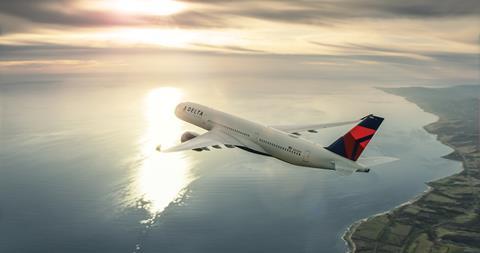 Airbus says the partnership will help it identify customers’ “specific needs, to ensure our zero-emission aircraft will be a game-changer for sustainable aerospace”.

In September 2020, Airbus disclosed its “ZeroE” programme, an effort to develop hydrogen-powered aircraft for service entry in the mid-2030s.

However, technical details about such an aircraft remain unclear, as does the viability of the business case for developing hydrogen-powered passenger jets.

In February, news broke that Airbus partnered with Safran and GE Aviation to test a hydrogen-fuelled engine using an A380.

Delta will evaluate “the technical and economic viability of hydrogen-fuelled aircraft, identifying the pathway for introduction into Delta’s fleet and operations, as well as the aircraft’s potential performance in Delta’s fleet”, the airline says.

Its work will include studying “challenges, such as flight-range limits, refuelling time and airport compatibility”.

More broadly, Delta will assess infrastructure requirements needed to support use of “green hydrogen”, a phrase generally meaning hydrogen produced and delivered using methods that minimise use of fossil fuel.