Embraer has unveiled a family of four low- or zero-emission concept aircraft for the regional market that it hopes to fly over the coming decades, including hybrid-, all-electric and hydrogen-powered models.

Dubbed, “Energia”, the concept aircraft family was unveiled during a live-streamed event on 8 November.

Two electric motors will be deployed during take-off and climb to provide “boosting power” to the standard piston engine, which will operate on its own during cruise, he says. Embraer thinks the electric motors can be air-cooled ”decreasing the complexity of the thermal-management system”, says Affonso.

The E9-HE features twin aft-mounted propellers – reducing noise by about 60% – retractable landing gear and range of 500nm (926km). It will be about 50% more eficient than an aircraft powered by a gas turbine, adds Affonso; CO2 emissions will also be cut by 50%, or 90% if the piston engine uses sustainable aviation fuel. 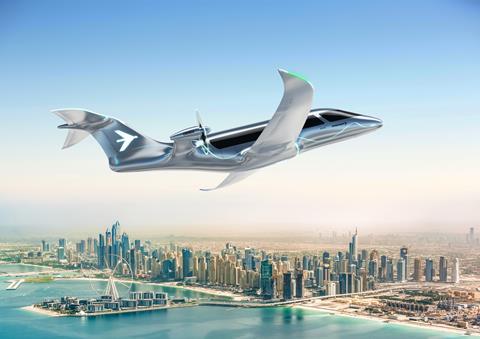 Next up will be two models for service entry in 2035: the fully electric E9-FE and and the hydrogen fuel cell-powered E19-H2FC.

As with its hybrid sister aircraft, the high-wing E9-FE will have nine seats and about 200nm range, says Affonso, which “covers more than 90% of the target market”. It will have a “glider-inspired” high-aspect-ratio wing and a single propeller mounted at the centre of its T-tail. 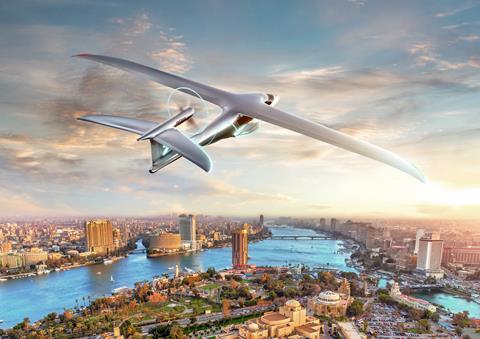 Embraer plans for the E9-FE to have “swappable batteries located at the nose of the aircraft, to reduce turnaround time and reduce charging costs”, Affonso says.

Sized for regional operations, the E19-H2FC will accommodate 19 passengers and will have range of 200nm – though Affonso says that could potentially by extended “as required by customers”. In addition, “high-specific-power fuel cells and high-specific-energy liquid hydrogen tanks” will help minimise weight, he adds. 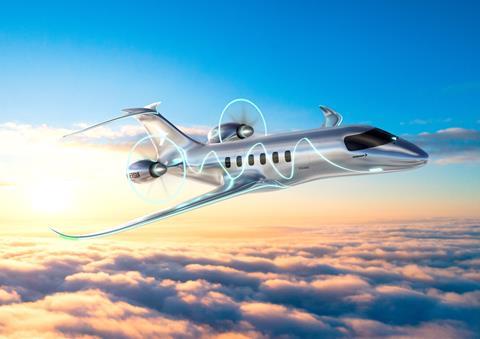 Embraer intends to round out the Energia family with its gas turbine-engined E50-H2GT, a 35-50-seat aircraft with twin powerplants capable of burning either aviation fuel or hydrogen.

Targeted for service entry by 2040, the E50-H2GT’s range will be 350nm when fuelled by hydrogen and 500nm when burning standard jet fuel or SAF, Embraer says.

Affonso believes the two nine-seaters could be flown by a single pilot, while the larger pair will, initially at least, require two flightcrew. But, he says “in the timeframe we are talking about”, advances in automation could mean that only one pilot is required “and eventually an autonomous airplane”.

Embraer Commercial Aviation marketing vice-president Rodrigo Silva e Sousa stresses that all four designs – which the company has been working on over the last two years – are “more than just technology demonstrators” and there is a “real intention to bring those projects to life”.

None of the Energia aircraft have been launched as commercial products yet, but this will have to happen “in the next five to 10 years to have service entry on time”, says Meijer.

Embraer sees a market for up to 4,000 aircraft in the space covered by the Energia range which ”align very well with the new post-Covid future ahead of us”, he adds.

While aimed at the commercial market, Sousa says the architectures will also have potential applications in business aviation.

The Energia project is separate from an ongoing effort by Embraer to develop a 70-90-seat clean-sheet conventional turboprop, with service entry this decade. The airframer has not officially launched that programme, but promises more news in early 2022.

Embraer also views the project as a path toward rolling out hydrogen-powered variants of its E2 regional jets by 2050. Airbus has likewise committed to developing hydrogen-powered aircraft, but for service entry in the the mid-2030s.

Embraer unveiled the Energia line-up several months after revealing broad carbon-reduction goals. In August, the company said all its aircraft will be capable of burning 100% SAF by 2030 – currently, aircraft engines are approved to burn fuel mixes containing 50% SAF.

Meijer says the company is ”working closely” with the E2’s engine supplier Pratt & Whitney to achieve that 2030 goal.

Embraer also pledged to develop “solutions” in support of “net-zero aviation emissions” by 2050.

In recent weeks, a broader swath of the aviation industry – including trade group IATA – has pledged to achieve the 2050 net-zero goal.

“It is bold, its ambitious. But we are confident we will get there,” Meijer says. “There has never been a more critical time for the world to make the leap to green.”

Embraer has also predicted that the Covid-19 pandemic has changed the world in ways that will create more demand in the long term for regional aircraft. Those changes include the movement of people from large to smaller cities.