Brazilian airframer Embraer lost $732 million for the full year 2020 but says an increased demand for regional travel will drive its post-pandemic recovery.

The company declines to make predictions for 2021, but with a firm order backlog at $14.4 billion, executives expect it to return to profitability soon. 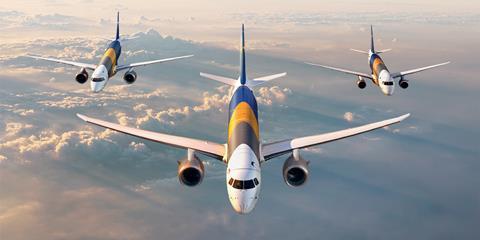 “2021 will remain a challenging year. The crisis is not over, the scenario is uncertain and volatile,” says Embraer chief executive Francisco Gomes Neto. “But despite that uncertainty we are confident that the market will pick up activities in second half [of 2021] and we are prepared to grow strongly in 2022.”

“We’ve had no cancellations of firm orders since the beginning of the pandemic,” adds chief financial officer Antonio Carlos Garcia. “That is proof we do not have a speculative backlog compared to our competitors.”

“We are cautiously optimistic in signing new contracts in 2021,” he adds.

Neto had said in December that he expects that within five years the company will be bigger than prior to the global pandemic.

The company had to deal with the failed commercial aerospace partnership with Boeing, worth $4.2 billion, which negatively impacted the airframer’s results.

The US firm backed out of the deal in April, just as the coronavirus crisis was hitting its peak. Embraer says it has booked most of its costs relating to that event in 2020, and executives add they hope to announce other potential partnerships “in the near future”.

But while customers have remained loyal, Gomes Neto says the company knows it needs to broaden its customer base to achieve ambitious targets it has set for itself in the coming years.

Gomes Neto would not comment on discussions it may be having with German flag carrier Lufthansa, after that airline’s chief executive mentioned in a webinar in February that the carrier could be interested in the Brazilian airframer’s modern E2 jets.

“We are pleased by the CEO’s comments and we agree with them but we are not disclosing our campaign,” Gomes Neto says.

Helvetic Airways, a subsidiary of Lufthansa-owned SWISS, has taken delivery of several E190-E2 jets, and will be receiving its first E195-E2 later this year. SWISS itself, however, has opted for the Airbus A220, the E2 jets’ primary competitor.