Eve to simulate its planned eVTOL service in Chicago next month

Eve, based in Melbourne, Florida, is developing a four passenger eVTOL, with the goal of bringing the air taxi into passenger service by 2026. It has said the aircraft will have 54nm (100km) of range. 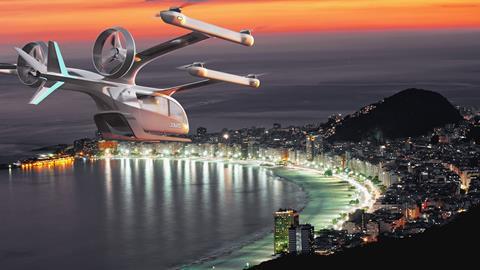 “Simulating the eVTOL operation in Chicago allows us to study how people will experience this service and understand the entire ecosystem requirements for our product and services,” says Eve co-chief executive Andre Stein.

The simulations will last three weeks, with ground tests to start on 12 September, followed by the start of passenger flights on 14 September.

“The company aims to study operations, ground services, passenger journeys and eVTOL operators needs,” says Eve. “The city of Chicago will gain knowledge about the infrastructure and ecosystem needed to enable the launch and expected long-term growth of UAM”.

Eve’s partner Blade does not itself operate aircraft, but rather owns a technology platform that lets travellers book short-distance air travel on aircraft operated by partner companies. In June 2021, Eve said it agreed to provide up to 60 of it EVTOLs for operation under Eve’s platform starting in 2026.

Eve will perform the Chicago simulations from an existing helicopter landing site called Vertiport Chicago. Helicopters will carry passengers to helipads in two Chicago suburbs – Schaumburg and Tinley Park – each about 30 miles (48km) away. The demonstrations will include morning and afternoon flights on weekdays, Eve says.

Brazilian airframer Embraer created Eve as an internal project before spinning the division off into a standalone start-up. Eve became publicly trade in May, with Embraer remaining as its largest shareholder. Eve has said Embraer will provide it with engineering and other support.

Eve is among a number of companies developing air taxis with the ambition of developing intra-city air transportation systems. Companies in the space envision an Uber-of-the-sky model, saying customers will be able to hail air taxis via mobile-phone apps.

But the concept must overcome various hurdles, including the challenge of certificating a new class of electric air vehicles, and then of producing the aircraft at high rates and for relatively low cost. Noise caused by air taxis could also spur opposition from communities and local governments.