A January blaze that damaged Eviation’s Alice prototype ignited after hours of powerplant testing, involved lithium-ion batteries and forced the aircraft’s three occupants to evacuate, according to detail contained in fire incident reports.

Prior to exiting the aircraft, the team – which apparently included staff from flight certification company AeroTEC and electric motor maker Magnix – noticed that Alice’s battery box was hot. The battery subsequently “exploded” according to the Federal Aviation Administration (FAA).

The specifics of the incident are included in fire reports received by FlightGlobal from the Prescott, Arizona government.

The 22 January blaze occurred on the ground at Prescott Regional airport, where Israel-based Eviation had been testing the prototype.

Alice is an in-development, nine-passenger, all-electric business and commuter aircraft. It has three propellers powered by a 920kWh lithium-ion battery pack, and promises a 440nm (815km) range and 220kt (407km/h) cruise speed. 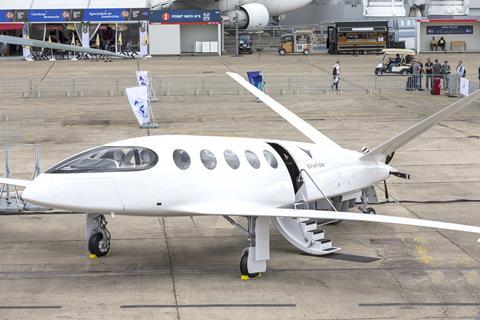 “Small electric aircraft heavy smoke,” a Prescott Fire Department report says of the blaze. “Owner stated that we would not be able to extinguish due to the heavy Li-Ion battery load”.

The fire originated in the aircraft’s “operator/passenger area”, the report says, but does not specify a cause.

“Further examination of the aircraft is needed, to be performed by qualified individuals, in order to determine the exact sequence of events through which the fire started,” says a separate investigation report from Prescott fire inspector Bret Lucas. “The cause of the fire is undetermined.”

The FAA did not investigate the incident, however. “While the incident was reported to the FAA, the aircraft in question was a non-certificated prototype that was not intended for flight,” the agency says.

In January, Eviation issued a short statement saying the fire was “believed to have been caused by a ground-based battery system which was being utilised during rigorous testing of its all-electric airplane”. 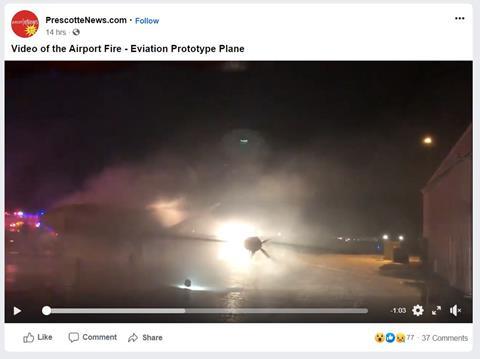 The Prescott fire department received the fire alarm at 18:29 local time on 22 January. Firefighters from a nearby station arrived on the scene 6min later, a report shows.

“Owner asked if we could just protect the exterior of the fuselage,” the report says.

The team “provided protection to fuselage with master streams” but also sprayed inside the “fuselage to cool the remainder of the batteries”.

“Upon arrival I observed a white three-engine airplane parked in front of a closed door hanger,” says the fire inspector’s report. “I observed soot and burn marks on the window and door areas.”

“A possible malfunction occurred of the aircraft battery system while the engines were being tested, which resulted in the fire”, the fire marshal said, according to the inspector.

Three people were aboard Alice when the fire started: pilot Steve Crane, who sat in the captain’s seat, engineer Andrew Blanchard, who was beside Crane, and engineer Jonathan Johnson, who sat in a rear-facing seat behind Blanchard, the report says.

“They had been testing the two wing engines off and on since noon,” it says. “At about 17:40, they started up the engines and continued to test them as they did all day.”

At about 18:25, Johnson “noticed a slight temperature rise of one of the battery cells, but said that it was still within normal operating temperatures.”

“He got out of his seat and went to the battery box. He felt the box, noticing it was getting hot, then he turned back and noticed gray smoke coming from under his seat,” says the inspector’s report. “Johnson called out, ‘Smoke, smoke, smoke’, and then, ‘Get out, get out, get out.’”

Johnson pushed an “emergency stop button” and Crane put the throttles in neutral.

“All three then exited the plane via the port door,” the report says.

Documents do not otherwise identify the people involved. But LinkedIn shows a Steven Crane as chief test pilot at AeroTEC, and an Andrew Blanchard as flight-test engineer at that company; Washington state-based AeroTEC is a partner on the Alice project and has previously worked with Magnix, among other clients.

The fire report also says a technician named Bryce Aberg was at the scene. LinkedIn lists Aberg as a power electrics engineer at Magnix. Eviation is part owned by Singapore’s Clermont Group, which also owns a stake in Magnix.

Eviation named Magnix and Siemens – now Rolls-Royce – as propulsion system providers, while GKN, Honeywell and composite specialist Multiplast are also involved. Batteries are to be provided by Korean firm Kokam. US airline Cape Air is the aircraft’s commercial launch customer.

Eviation intended for Alice to make a first flight in 2020 followed by deliveries in 2022, but has said little since the fire. However, an October press release from a supplier to the programe – Altitude Aerospace – gives 2021 as the date for the maiden sortie.

Given the ambitious nature of the programme, obtaining certification in such a short period of time seems extremely challenging.

Cape Air did not respond to a request for comment about its plans to operate Alice.