Staffers in the Federal Aviation Administration’s aircraft certification branch believe industry pressure has negatively affected safety oversight and that top managers have not been held accountable for safety-related shortcomings.

That is according to results from a recent FAA-commissioned safety survey of staff in the agency’s Aviation Safety organisation, which certificates aircraft.

The survey reveals perceptions among staff that FAA officials failed to sufficiently concede the FAA’s shortcomings in the wake of two Boeing 737 Max crashes. 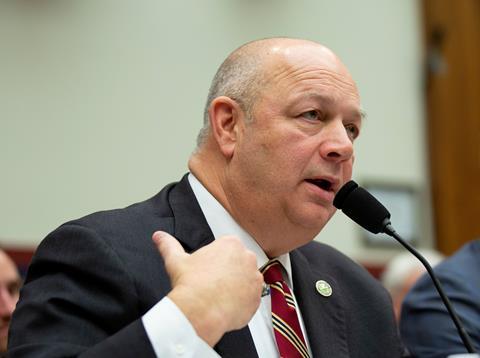 Steve Dickson, administrator of the Federal Aviation Administration, testifies before the United States House Committee on Transportation and Infrastructure on 11 December.

Third-party researcher Mitre conducted the survey between October 2019 and February 2020, a period during which the agency faced intense scrutiny.

Some 25% of the 7,100 staffers in the FAA’s Aviation Safety division responded to the survey. Mitre also interviewed 17 executives and labour leaders and hosted focus groups.

“Employees believe [Aviation Safety] senior leadership painted too rosy of a picture in the aftermath of the 737 Max mishap and did not acknowledge the needed changes to FAA safety-related policies and processes,” says a 53-page draft review of the survey results, released 7 August by the FAA.

“The perception is that no one at FAA has taken responsibility or been held accountable for the 737 Max,” it adds.

The report comes as the FAA moves forward with certificating the Max, which has been grounded since March 2019, after two crashes that killed 346 people. The FAA has been criticised for delegating too much authority to Boeing during the Max’s certification. 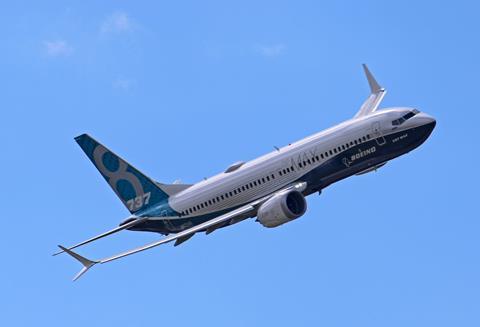 A Boeing 737 Max 8 seen in Boeing’s colours. Regulators grounded the type in March 2019.

The agency says it has steadfastly maintained its dedication to safety. It recently issued a proposed order to lift the Max’s grounding. Boeing has estimated certification should occur in time to allow Max deliveries to resume in the fourth quarter.

“The assessment was designed specifically to encourage candid feedback from the workforce and to ensure employee confidentiality,” according to the FAA.

The agency says the survey also will help it develop a “voluntary safety reporting programme” through which employees will be free to report safety concerns in confidence and without threat of retaliation.

“The results of the… survey, while in some respects encouraging, show in other respects that we have work to do to address problems in safety culture,” the FAA says. “The survey was an important step to achieving institutional improvements.”

The survey is part of a safety improvement plan put in motion in 2019 by associate administrator Ali Bahrami, head of the FAA’s Aviation Safety organisation, according to the agency.

In a note to his staff, Bahrami says the survey reveals that employees “share common safety goals”.

“Perhaps more important, I was very concerned to see that a portion of our workforce does not believe their safety concerns are taken as seriously as they should be by the [Aviation Safety] management team,” the note adds. “I want you to know that we take this feedback very seriously.”

The survey’s results were not all negative. It concludes the Aviation Safety division has a “good foundation for a strong safety culture”, and 69% of respondents said they were comfortable reporting safety concerns.

But other workers said they felt “powerless” to raise concerns, and the survey revealed a perception that the agency has gone too far in delegating certification work.

“There is a general concern that the FAA… has delegated too much authority to industry, which negatively impacts the

safety of the national airspace,” says the report.

“FAA employees in the field are strongly pressured by industry to meet their production deadlines,” it adds. “When industry perceives employees are standing in the way, they escalate to senior leadership and/or Congress.”

Those concerns relate to the agency’s Organization Designation Authorization process – under which the FAA transfers some certification work to companies seeking certification.

Respondents also reported that “FAA staff can be overpowered in meetings with industry, given the firepower that industry will bring to the table to get what they want”.

And 49% of respondents disagreed that the FAA makes “data-driven decisions about safety regardless of external pressure”.

The survey also reveals that staff had “concern that [Aviation Safety] senior leadership in Washington, DC is not reinforcing a culture that puts safety first”.

“Many believe that [Aviation Safety] senior leaders are overly concerned with achieving the business-oriented outcomes of industry,” it adds.

In response, the FAA says, “The lack of confidence with [Aviation Safety] management expressed by some employees is unacceptable” to Bahrami and FAA Administrator Steve Dickson.

The National Air Traffic Controllers Association, which represents workers in the Aviation Safety division, says the survey “reinforces the need for” a stronger safety reporting programme.