FAA subjects all US 787s to decompression panel inspections

The US Federal Aviation Administration is expanding to all US-registered Boeing 787s an airworthiness directive (AD) related to potential failure of decompression panels.

The latest order, made public on 19 April, builds on a related AD that took effect on 8 March.

Both orders respond to “reports of multiple incidents of torn decompression panels found in the bilge area” of 787s, FAA documents say. 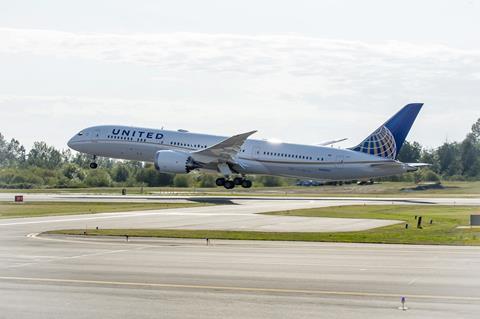 As a result, “leakage in the bilge area… could, in the event of a cargo fire, result in insufficient Halon concentrations to adequately control the fire”, the agency says.

The agency has “received new information indicating that additional airplanes may be subject to the unsafe condition”, it says. “The FAA determined that all of the decompression panel part numbers may be subject to damage (tearing) or becoming disengaged.”

It will require 787 operators to complete “repetitive general visual inspections for disengaged or damaged decompression panels of the bilge barriers located in the forward and aft cargo compartments”.

Operators will be required to reinstall panels found to be disengaged, and to replace damaged panels.

Decompression panels typically help equalise pressure between compartments within the fuselage, helping prevent structural damage in the case of a rapid decompression.

Boeing tells FlightGlobal that the panel problem is “not an immediate safety of flight issue”.

“We recommended increased inspection and replacement of components as necessary, and we have worked on redesigning the part,” Boeing adds. “We fully support the FAA’s airworthiness directive.”

Story updated on 19 April to include comments from Boeing.