July cancellations push Max backlog cut to 860 for the year

Boeing’s 737 Max backlog declined nearly 20% in the first seven months of 2020, with the company stripping more than 850 jets from its books due to order cancellations and accounting adjustments.

The tally includes recently released data from July and comes as Boeing tackles the dual challenges of the 737 Max grounding and the airline industry downturn.

Despite those pressures, however, Boeing says its backlog remains strong. 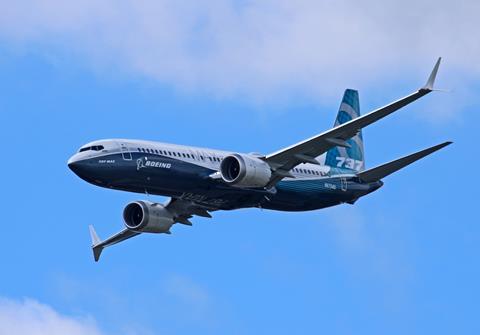 And aerospace analyst Michel Merluzeau suspects the Max will have a strong future, assuming the aircraft safety returns to service.

Boeing has predicted that the Federal Aviation Administration will certificate the aircraft in time to allow Boeing to resume deliveries in the fourth quarter.

Those bring to 416 the number of Max orders cancelled since the start of the year, according to data from Boeing.

Lessors have accounted for the majority of the 416 Max cancellations so far in 2020. They nixed at least 289 Max orders, or about 70% of the total, figures show. Those lessors include companies like AerCap, Air Lease, Avolon and GE Capital Aviation Services.

Airlines have cancelled at least 71 of the jets – or 17% - while the remaining 56 cancellations come from unnamed customers and include Boeing Business Jet variants of Max.

Additionally, Boeing says that in July it stripped nine 737 Max from its backlog to comply with its ASC606 accounting guidelines.

In the period from January through July, Boeing has removed 448 Max orders from its backlog to comply with those guidelines. The airframer still holds contracts to sell those jets but has less certainty about the likelihood that the sales will close.

But analyst Merluzeau, who works at consultancy AIR, can envision airlines placing additional Max orders once the industry recovers, and he suspects Boeing may have success selling cargo or military variants of the jet.

Merluzeau estimates that the Max grounding and the industry downturn each account for about half the Max’s backlog tumble.

He also views the pandemic as impacting Boeing and Airbus about equally. In the first six months of 2020, customers cancelled 66 Airbus jets, according to Cirium fleets data.