The Japanese company will display a mock-up of the M100's cabin at the Paris air show and intends "later this year" to formally launch development of the new regional jet, which it has tailored to the requirements of US regional airlines, it says.

As part of ditching the MRJ moniker altogether, Mitsubishi Aircraft has renamed the MRJ90 the SpaceJet M90.

"As we prepare for entry-into-service for the SpaceJet M90, we are also announcing the SpaceJet M100 – the result of our research and development during the past few years and the answer to the regional market's current and future needs," states Mitsubishi Aircraft president Hisakazu Mizutani. 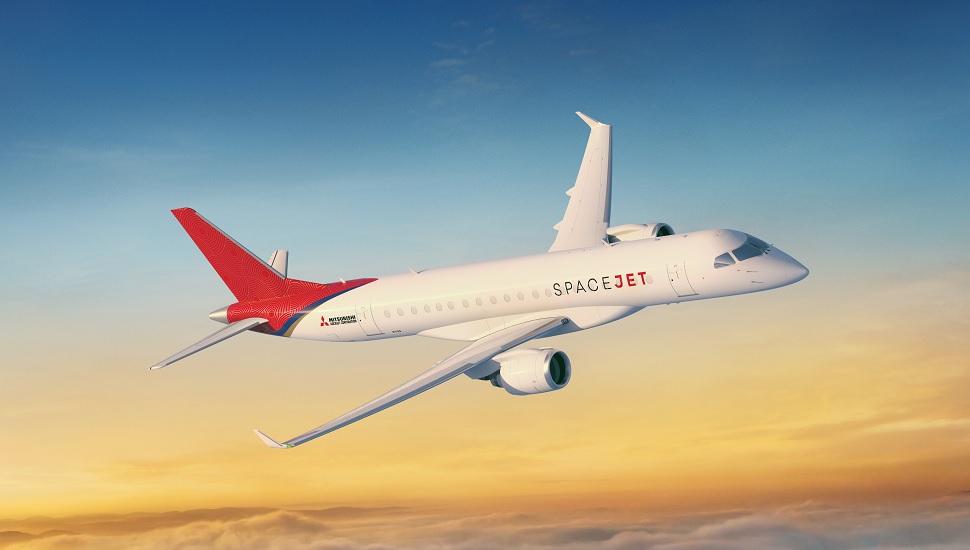 Mitsubishi Aircraft has rebranded the MRJ as the SpaceJet and is targeting US carriers with a 76-seat variant, the M100

The M100 reflects Mitsubishi Aircraft's intention to offer an aircraft that fits snugly within the requirements of US regional airlines, the world's top regional jet buyers.

Carrying 76 seats – spread across first, premium economy and economy-classes – and with a maximum take-off weight (MTOW) of 39,000kg (86,000lb), the M100 will fit within the operational constraints of most US regional carriers. So-called scope clauses between major airlines and their pilot unions largely restrict those feeder carriers from operating aircraft with more than 76 seats or an MTOW exceeding 39,000kg.

Mitsubishi Aircraft has, until now, lacked an aircraft to properly address those constraints.

Its M90, which is set to enter service in 2020, exceeds the MTOW cap. The now-axed MRJ70 would have met the weight restriction but carried only 69 seats in two classes, eroding its competitiveness against 76-seaters, notably the Embraer 175.

Should Mitsubishi Aircraft move forward with development and certification, the M100 could become the only new-generation, clean-sheet regional 76-seat jet that matches US regional airlines' requirements.

"Having evolved from a concept study for the now retired MRJ70 designation, the SpaceJet M100 is designed to adapt to specific market needs," says Mitsubishi Aircraft. "In the US market, the aircraft is optimised to be scope-clause-compliant in the 65-76-seat, three-class cabin configuration. It can also be flexibly configured for other global market needs up to 88 seats [in a] single class."

Hints of major MRJ news had swirled for weeks; some analysts insisted that Mitsubishi Aircraft needed a 76-seater to make the programme successful.

Mitsubishi Aircraft was not immediately available to provide specific details about how the M100's design differs from that of the M90 or the MRJ70.

In creating the M100, Mitsubishi Aircraft believes it has "optimised" the aircraft's length, cargo space and the arrangement of its overhead bins and seating.

But the aircraft will have enough overhead bin space for each customer to stow a roller-bag.

Mitsubishi Aircraft's disclosure of its M100 plan comes days before the Paris air show and one week after parent Mitsubishi Heavy Industries announced it has been negotiating to purchase the Bombardier CRJ programme, or assets thereof.

Analysts say that owning the CRJ's global sales and services footprint could help Mitsubishi win airlines' confidence for its own aircraft.