NASA may develop a test aircraft to evaluate several next-generation, efficiency-improving technologies that could be incorporated into the next single-aisle commercial aircraft, which manufacturers will likely bring to market in the 2030s.

NASA administrator Jim Bridenstine says the agency could use such an aircraft – possibly NASA’s next “X-plane” – to evaluate truss-braced wings, small-core turbofans and advanced electric systems.

“I really believe that in the future there is a demonstrator aircraft out there that will help us advance all of the things necessary for the United States of America to remain preeminent in aeronautics in the commercial aviation industry,” Bridenstine says during the American Institute of Aeronautics and Astronautics’ virtually-held 2020 Aviation Forum.

“I think there is room in the future for that kind of capability,” he says. “These X-planes are critical demonstrators.” 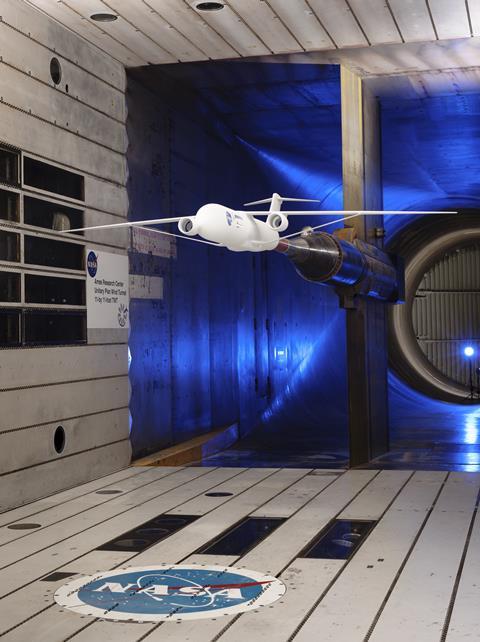 NASA X-planes now in development include the X-59, a supersonic aircraft with a quieter sonic boom, and the electric-powered X-57.

But in the last decade, NASA researchers have studied designs and technologies practical for jets that will replace Boeing’s 737 Max and Airbus’s A320neo-family, NASA associate administrator for aeronautics Bob Pearce says during the conference. Analysts suspect those new narrowbodies will hit market in the early 2030s.

Technologies under review by NASA include a subsonic narrowbody aircraft with a truss-braced wing that could cruise at about Mach 0.8, says Bridenstine. Those studies fall under NASA’s Subsonic Ultra Green Aircraft Research programme.

Boeing, which received funding through that programme, revealed its conceptual truss-braced-wing narrowbody in January 2019. Boeing’s concept is an aircraft with a 170-ft-span (52m) folding wing. The wing would be atop the fuselage and be supported by a truss composed of four struts. By comparison, the 737 Max has a 117ft-span wing, according to Boeing. 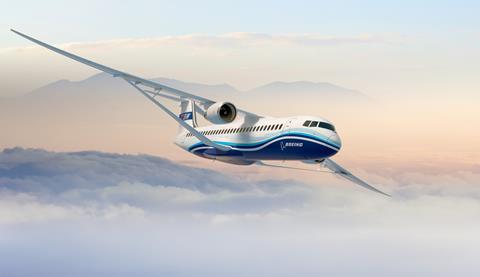 Boeing unveiled this image of a conceptual truss-braced-wing narrowbody passenger aircraft in January 2019. The company has worked on the project with NASA.

Trusses can support longer wings, which have greater aspect ratios, which in turn translates into less drag and 5-10% less fuel burn, Pearce says. NASA has tested the truss design at its Ames Research Center in California.

“We are going to need to look seriously at [the] transonic truss-braced wing,” says Pearce. “That is a big shift.”

By shrinking the core, engineers can increase a turbofan’s ratio of bypass air, and therefore its efficiency, without increasing fan diameter. That is critical because the weight and drag of larger fans can negate benefits from higher bypass ratios.

The agency has also studied advanced electrical systems and hybrid-electric propulsion technologies that it predicts can deliver another 5% fuel efficiency.

Additionally, NASA is studying means of increasing how quickly composite aircraft components can be produced. For their next narrowbody aircraft, airframers like Boeing and Airbus will likely need composite production rates to be six times greater than current rates, Pearce says.

“I think there’s a real opportunity in the 2030s to enable transformational commercial transports,” he adds. “The industry is going to have to develop a new single-aisle airplane in that timeframe.”