Boeing has made design tweaks that allow its in-development truss-braced wing to operate at typical jet cruise speeds, a development that could bring significant fuel savings to tomorrow’s commercial aircraft.

The company has worked for years on truss-braced wings – which derive efficiency from higher aspect ratios – but has now unveiled a design that can match jet aircraft speeds.

Boeing’s new “transonic truss-braced wing” can fly up to Mach 0.80, compared to a previous design, which could fly M0.70 to M0.75, the company says.

Boeing achieved the improvement by tweaking the truss and the wing sweep. It has estimated such wings can reduce an aircraft’s fuel burn by 8-10% compared to aircraft with conventional cantilevered wings.

The company on 8 January released details of the design and a computer image of a narrowbody aircraft with the wing. 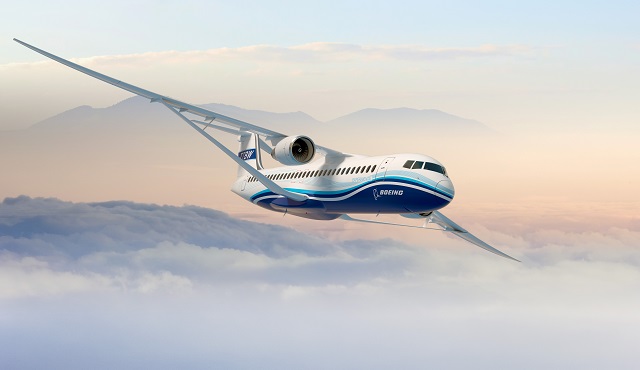 But, Harrison says aircraft of any size could carry such a wing. The technology is intended to be ready for operation in the 2030-2035 timeframe.

Engineers have worked for decades to perfect such technology. Long wings have higher aspect ratios, which translate into efficiency. But they are subject to wobble and a dangerous condition called flutter, which trusses can alleviate.

“We are essentially taking the wing aspect ratio and doubling it,” Harrison says. “The aspect ratio allows us to reduce the induced drag – the drag due to the creation of lift. We get better performance out of the vehicle.”

“Flutter is a primary design consideration for higher-aspect ratio designs,” he adds.

Boeing’s work stems from an effort launched about a decade ago to identify means to improve aircraft efficiency, including through alternative fuels, aerodynamic improvements and electric power, according to a 2017 posting on Boeing’s website.

Boeing then secured funding as part of NASA’s Subsonic Ultra-Green Aircraft Research programme, which aimed to develop technologies to cut aircraft fuel burn by 70%, according to Boeing and NASA documents.

As part of that programme, engineers have evaluated truss-braced wings with aspect ratios (the ratio of a wing’s span to its chord) as high as 27, according to a NASA programme overview.

“There are aerodynamic and structural challenges. It’s really a step away from a conventional wing,” he says. “The changes under the surface are very significant.”

Boeing’s project remains in the research phase, though it has completed some wind-tunnel testing.