In recent days, the company hung two massive GE Aviation GE9X turbofans from the aircraft's wing, in a milestone bringing Boeing closer to its goal of a 2019 777X first flight.

The move also marks another step toward to the entry-into-service of an engine with the largest fan ever produced for a commercial aircraft, according to Boeing and GE. 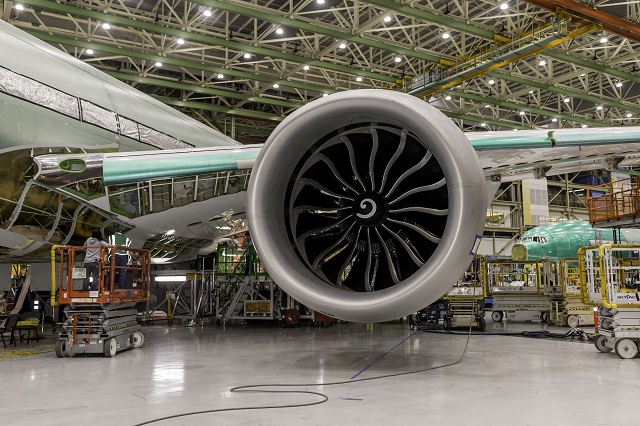 The GE9X's compressor has a 27:1 pressure ratio, and the engine has an overall pressure ratio of 60:1, which GE says are the greatest ratios for any of its engines.

Those pressure differentials are among reasons why the GE9X uses 10% less fuel than the GE90, which has an overall 40:1 pressure ratio and powers first-generation 777s, according to GE. 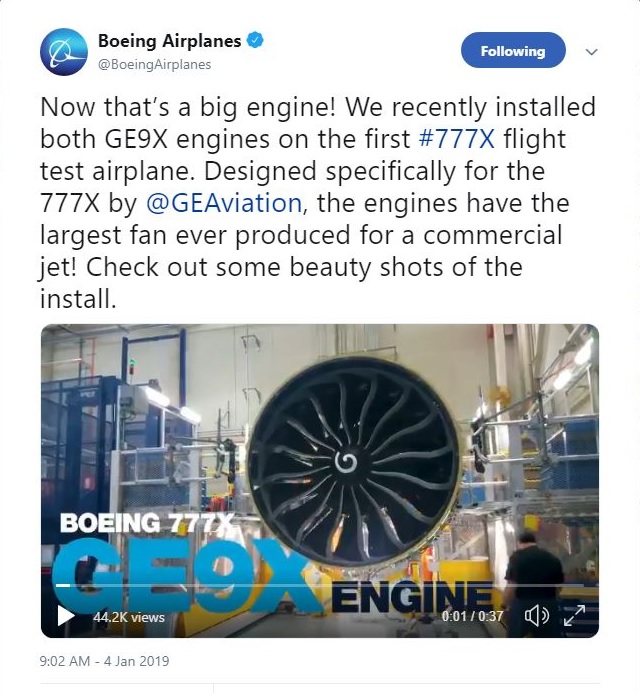 Now fitted with its 105,000lb-thrust (467kN) GE9X engines, the first flight-test 777X – a 777-9 variant – remains inside Boeing's Everett hangar, awaiting a roll-out that Boeing has said could happen by March. 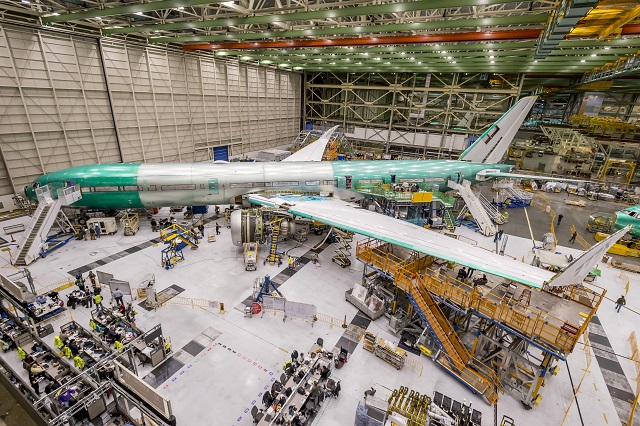 Boeing expects first flight in 2019 followed by certification and first delivery in 2020.

The Seattle-based airframer has made steady progress assembling several 777X test airframes in the last year.

It began assembling the first two 777-9 flight test aircraft in mid-2018. The first of those aircraft came together by November, when Boeing joined the aircraft's nose with its mid and aft sections. Boeing powered that aircraft's electric systems for the first time in December.

In addition to two flight-test aircraft, Boeing last year assembled a 777X fuselage that will be used exclusively for static ground-based testing.

GE is well into a second round of GE9X flight testing that kicked off on 10 December. The engine had completed eight test flights and logged 55h of run time during the second round as of 4 January, GE tells FlightGlobal.

GE expects the second round will involve roughly 18 flights and include evaluation of the GE9X's software and performance in hot-and-high conditions.

"The campaign is moving ahead exactly on target, with very efficient testing," GE says. "The plan is to complete this campaign in the first half of the year."

GE conducts the tests with a GE9X hung from the wing of its 747-400 flying testbed, which operates out of Victorville, California.

GE's first round of flight tests were delayed several months after the company discovered unexpected wear on "lever arms" that alter the pitch of the GE9X's compressor vanes, GE has said.

Eventually, GE started the first round of testing in March using an engine in the original configuration as it worked on a fix. GE completed the first flight-testing round in May, also after 18 flights.

As of mid-December, GE had subjected the GE9X to water-ingestion, over-temperate and crosswind tests, but had not completed blade-out, hailstone, bird-ingestion or endurance testing, it said at the time.

Story corrected on 8 January to note that Boeing expects 777X certification and first delivery in 2020.