The Anchorage-based airline, which currently flies De Havilland Canada Dash 8-100s on regional routes within Alaska, signed a letter of intent to acquire up to 50 of Airflow’s in-development aircraft, the manufacturer said on 8 June.

Neither company discloses whether Ravn has put any money down as part of the agreement. Airflow intends for its aircraft to be in service in 2025. 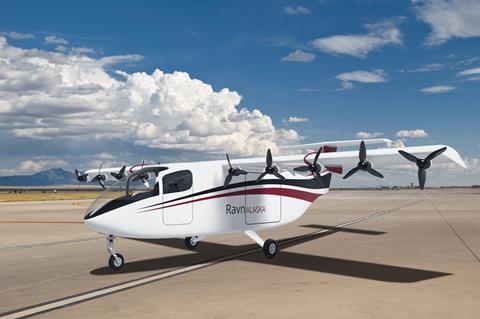 The aircraft will be able to land on traditional runways, which differentiates Airflow from the many competing companies – Archer Aviation and Wisk Aero, for example – that are developing electric vertical take-off and landing (eVTOL) aircraft.

Airflow says its design faces fewer regulatory and technical challenges than eVTOLs, which typically require somewhat novel designs involving either swivelling props or a mix of forward-facing and downward-facing props. Also, many eVTOLs under development will require a new infrastructure of landing ports.

While Airflow confirms it is working on passenger variants, its website only lists specifications for cargo configurations.

The aircraft can be used to “supplement existing cargo feeder routes” and will enable operators to benefit from the booming e-commerce market. They will cost one-third less to operate than helicopters or eVTOLs, Airflow says.

Airflow expects its aircraft will initially have a single pilot, though the company expects to bring autonomy to future variants.

Airbus shuttered its Vahana project in 2019.