Textron Aviation has launched an updated version of its signature single-engine Cessna Turbo Skylane T182T, and will begin deliveries in early 2023.

The Wichita, Kansas-based airframer says on 10 February that the four-seat piston aircraft has a range of 971nm (1,798km) and a service ceiling of 20,000ft, making it an attractive aircraft for high-altitude operations. 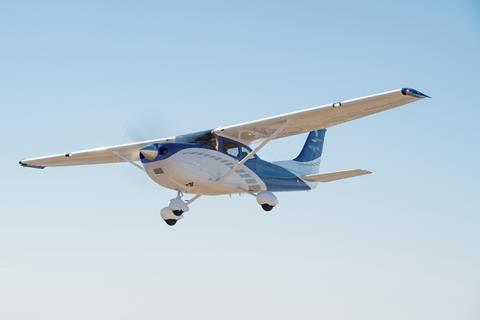 Textron will relaunch its classic Cessna Turbo Skylane 182T in 2022

It will be powered by a turbocharged Lycoming TIO-540-AK1A engine and have a maximum speed of 165kt (306km/h).

“The turbocharger adds another level of performance to an already exceptional aircraft,” says Textron Aviation chief executive Ron Draper. “The Cessna Skylane is a remarkably instinctive aircraft to operate, and the turbocharged engine provides even greater performance that enhances the overall flying experience.”

The new Skylane has a constant-speed, three-blade, electric de-iced McCauley propeller, and Garmin’s G1000 NXi avionics suite. It also has a built-in oxygen system for all four occupants, for travel at higher altitudes.

The Cessna Skylane has been in production since 1956, and Textron has delivered more than 23,000 of the type. The company began building a turbo version in 2001 but ceased production in 2013.