The California-based company on 18 January posted a video of its propulsion system in operation on the wing of modified De Havilland Canada Dash 8-300. It also released an image showing the powertrain, which includes a large nacelle.

Universal Hydrogen came onto the scene in 2020 as a start-up working to capitalise on what it views as the aerospace industry’s likely embrace of hydrogen as aircraft fuel.

It is working to create a hydrogen-fuel supply and distribution infrastructure, and developing a fuelling system that involves use of swappable hydrogen-filled fuel tanks called “modules”.

In recent weeks, Universal “completed integration of the fuel-cell powertrain into our flight-test aircraft”. It has since “been doing unit testing of the major powertrain components”, Eremenko says. 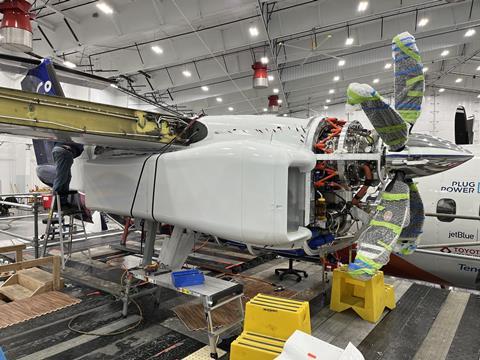 “This is just us proving out all of the powertrain elements working together, integrated into the aircraft,” he adds of the recent propulsion system run.

The system integrated on the Dash 8 is the same powertrain that Universal tested on a “ground test rig for the better part of a year, so we expect testing to go relatively quickly and smoothly from here on out.”

The company is now equipping the powerplant with fairings that fit “around the radiators on the side of the nacelle, to provide sufficient cooling flow at high power”, Eremenko says.

Once complete, Universal will conduct “high-power runs” of the system, likely in the next one or two weeks. Taxi tests and first flight, the date for which remains undisclosed, will follow, he adds.

Universal has said it expects to bring its technology to the aviation market in the middle of this decade.

Though Universal is using a Dash 8 as its first demonstrator, it expects an ATR 72-600 will be the first type in service with the modification.