VoloConnect will have four seats, retractable landing gear, a 52nm (97km) range, cruise speed of 97kt (180km/h) and a maximum speed of 135kt, says the company. 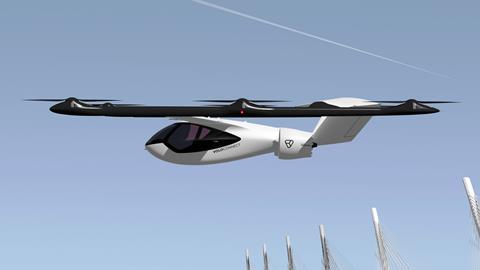 Volocopter revealed the project on 17 May during a press conference as part of the virtual EBACE Connect event.

VoloConnect will have two fixed wings and six lifting rotors. It will also have two aft-mounted fans to provide forward thrust.

Those fans and the fixed wings differentiate VoloConnect from the company’s other models: the two-seat VoloCity and the “heavy lift” VoloDrone.

Volocopter will continue designing those aircraft alongside VoloConnect, allowing it to address more-broadly the urban air mobility market, it says.

“This electric vertical take-off and landing aircraft is designed to connect suburbs to cities and complements the company’s existing family of aircraft for the intra-city mission,” Volocopter says. “VoloConnect’s distinctive hybrid lift and push design is expected to achieve certification within the next five years.”

“We have been working for years with a dedicated team at our Munich site,” he says, noting that Volocopter has filed for a design patent. 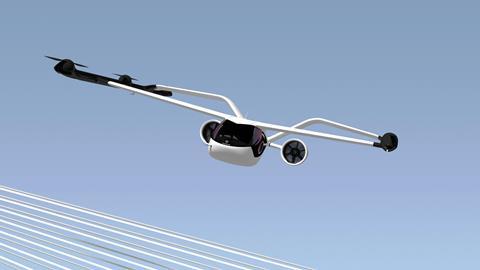 Volocopter expects to complete VoloConnect’s certification, and place the aircraft into service, in 2026. The aircraft will have Volocopter’s fly-by-wire flight-control system and be capable of autonomous operations.

However, initial variants may be piloted, depending on how quickly autonomous-flight regulations advance, says Reuter.

He declines to say when Volocopter might unveil a VoloConnect prototype or conduct first flight, saying only that the company “is working fast toward flying full-scale prototypes”.

In 2023, the company aims to begin operating passenger flights using VoloCity in either Paris or Singapore.

Noting that Paris will host the 2024 Olympic Games, Reuter says: “If I had to make a pick today, it would be Paris.”

He insists the company has sufficient financial resources to develop the three aircraft, noting that Volocopter recently raised $240 million in funding. “We are very confident we will receive the necessary funding to… complete our strategy,” he says.