While this left the carrier in better shape to cope with the challenges the pandemic brought, it took the momentum out of its recovery.

For all its ingenuity in developing its cargo activities to bolster operations during the crisis, Etihad – like its Gulf rivals Emirates and Qatar Airways – has no big domestic market to fall back on and is missing key transit traffic. As a result, it is highly dependent on the reopening of markets.

Already as the first wave of the pandemic began to subside, the Gulf carriers showed themselves keen to get on the front foot. 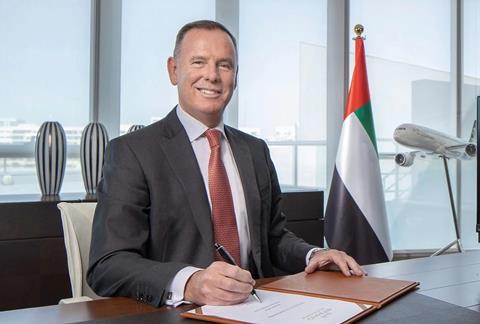 But while Emirates and Qatar retain more lofty ambitions, Douglas in November underlined a new pragmatism at Etihad Airways in a management restructure supporting the continued transformation of its business model to emerge as a “mid-sized” carrier.  Implementing this new model in an operating environment which remains fluid will be the key challenge ahead for Douglas.

While the crisis continues to restrict markets, wider diplomatic developments have seen new opportunities in the region open up. The carrier in February restored Doha flights for the first time since the summer of 2017, while the following month it is slated to begin scheduled flights to Israel.

Longer term decisions remain outstanding on bringing back capacity, especially given its new found shape. In this regard, all eyes will be on the fate of its 10 parked Airbus A380s.