Airbus, Air Liquide, Incheon International Airport Corporation (IIAC), and Korean Air have signed a memorandum of understanding to explore the use of hydrogen aviation fuel at Seoul Incheon.

The companies will also study the infrastructure necessary in South Korea for the future deployment of hydrogen-powered airliners, they say. 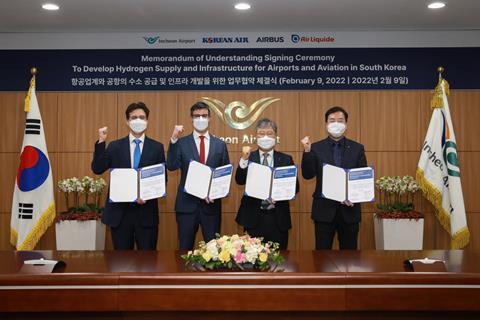 The signing ceremony between the four partners in Seoul

Under the arrangement, Korean Air will focus on operational aspects such as ground handling, maintenance, and fight operations. IIAC will focus on airport facilities, while Airbus and Air Liquide will explore demand for hydrogen-powered aircraft, as well as create a roadmap for the introduction of hydrogen fuel.

“This MOU will be a starting point for the Korean domestic aviation industry to systemize a hydrogen supply chain system and infrastructure development, where the introduction of hydrogen as an alternative fuel has been slow in relative comparison to other industries,” says Soo Keun Lee, Korean Air’s chief safety & operations officer.

Airbus notes that the four partners will focus on their areas of expertise to help define the potential opportunities of hydrogen.

Air Liquide says it already has a pair of hydrogen stations at Seoul Incheon that provide fuel for buses, cars and demonstration trucks that use hydrogen fuel cells.

“Together we will prepare a roadmap to first develop hydrogen usages at and around Incheon Airport and then build scenarios to support the deployment of hydrogen ecosystems connected to other Korean airports.”

Airbus is a major proponent of hydrogen, contending that it is a promising fuel for next-generation narrowbodies that ender service in the 2030s.