The airline industry is putting its access to capital at risk by failing to adopt standardised sustainability metrics, according to speakers at the Aviation Carbon 2022 event in London on 17 October.

They suggest that despite its capital-intensive nature, the industry currently offers the financial community a confusing mixture of self-selected sustainability KPIs and data relating to a patchwork of regional regulatory requirements – and in some cases nothing at all.

“We’re talking about the biggest problem faced by mankind and we don’t have common standards,” says Ulrike Ziegler, president of Impact on Sustainable Aviation, a body that supports the aviation finance industry’s net-zero effort. 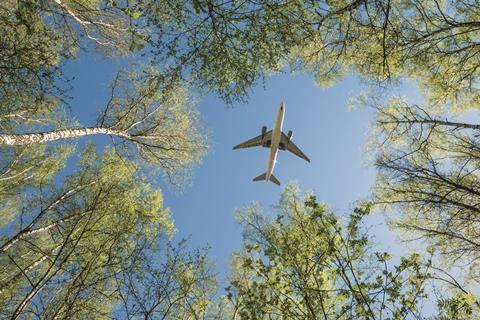 Crucially, the finance community “is concerned more and more about sustainability performance when they take their decisions”, explains Emi Mima, manager of sustainable finance at IATA.

“A commonly identified issue with the existing non-financial reporting requirements is that they perhaps don’t go far enough on their own to dispel fears of greenwashing,” Collins says.

“There is a perceived lack of consistency in the frameworks, metrics and methodologies used by reporting companies.

“This makes it difficult for my financing colleagues to get behind and support ‘green’ projects or sustainability-linked financing projects with confidence.”

That lack of a common standard when it comes to airline sustainability metrics “could impact the access to capital and the cost of capital for airlines”, Ziegler suggests.

That is particularly concerning, she says, because for the global airline industry to reach net-zero CO2 by 2050, “we need about $175 billion in annual investment”.

“And the data we see has no consistency… they use different metrics,” she states. “There is just no uniform standard.”

At the same time, Mima cites “an alphabet soup of initiatives, of frameworks, of regulations… that are mandated from [bodies such as] the European Union and the [US] Securities and Exchange Commission”, which tend to broadly seek the same outcomes but via different methodologies and data points.

Most of those schemes are not specifically designed for aviation, Mima notes, including the EU’s Corporate Sustainability Reporting Directive, the Financial Stability Board’s Task Force on Climate-related Financial Disclosures, and the SEC’s new sustainability disclosure requirements. When those metrics are combined with the industry-specific data collected by airlines, a confusing array of metrics emerges that is unlikely to reassure investors, she suggests.

Even the aviation-specific portion of the EU Taxonomy Regulation adds to the confusing picture, she adds, whatever its standalone merits.

In terms of solutions, IATA has set up a sustainable finance taskforce, Mima states, “looking to come up with ESG metrics that are specific to airlines”. It will report back later this year.

In the event of a standardised reporting framework being agreed, airlines would benefit from no longer needing to deal with “piecemeal requests from ESG investors, banks and regulators”, says Gene Levitin, head of aviation at investment bank Natixis.

But absent action on the issue, Mima is concerned that aviation might eventually become a “high-risk investment”.

Already she notes a reluctance among some potential financiers to recognise carbon offsetting in airline net-zero roadmaps.

And beyond their function in mitigating risks to accessing capital, standardised metrics might also mitigate investor concerns around sustainability-linked litigation and reputational risk, Mima suggests.

As ever for the airline industry, speakers agree that much can be gained from taking the initiative on sustainability issues, rather than waiting for someone else to do it.

“If we don’t take action, if we don’t assume responsibility, we are scared that the regulators will take action,” says Ziegler. And that could be “severe action”, she suggests, which might ultimately impact aircraft values and returns on investments.