Public policies are required by Latin American and Caribbean governments to incentivise production of sustainable aviation fuel (SAF) if the region is to be independent in helping carriers transition to net-zero carbon emissions, the president of trade body ALTA says.

LATAM Airlines Group chief executive Roberto Alvo, who is the current airline president of ALTA, called for clear public policies at a press briefing in Buenos Aires today, ahead of the start of the ALTA Airline Leaders AGM and forum. 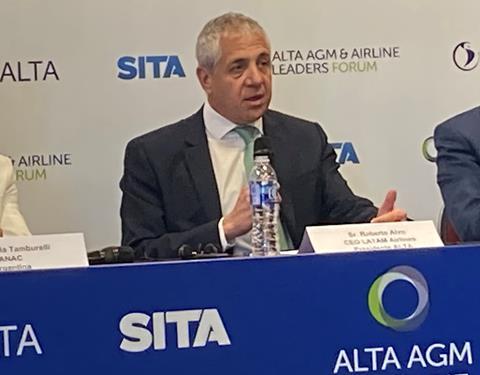 Roberto Alvo, chief executive of LATAM Airlines Group and president of ALTA, speaking a press conference ahead of the 2022 ALTA Airline Leaders Forum

Developing SAF production was an especially key topic during the press conference given states recently agreed to a landmark long-term aspirational goal of net-zero flights by 2050 at ICAO’s general assembly. While the ambition is not binding, industry leaders believe agreement on the goal will give impetus to upscaling SAF production - which remains less than 1% of aviation fuel

”SAF is not the only way to decarbornise the industry, but SAF will be an important part,” says Alvo.

”Today we have no clear indications of the tools to approach this. SAF prices are very high. So we need to have public policies that will the help the transition [to net-zero flights].

Alvo points to the conditions in Latin American providing the potential for the region to lead in production of SAF, both bio-based and synthetic types, but notes without policies in place to develop this, carriers will have to source SAF from outside Latin America. ”The region has the opportunity and also a very big challenge,” says Alvo.

He points to the conditions in Latin America, particularly in the south, as providing the potential for the region to lead in production of SAF, both bio-based and synthetic types, But he says without policies in place to develop this, carriers will have to source SAF from outside the region.

Noting states have taken different policy approaches to SAF production, he highlights the impact of the US approach, which adopted tax credits policy to incentivise SAF.

”As 75% of SAF is produced in the USA, you see which policy is most effective,” says Alvo. “Airlines need to have clear public policies…to make the transition possible.”

Alvo adds that ALTA has not imposed targets on its members in terms of SAF use, noting it is for individual airlines to set these goals and he would not be drawn on other members targets. LATAM itself in April became the first carrier in the region to publicly disclose such a goal, when it in April set its aim of SAF comprising 5% of its fuel needs by 2030.