ANA, JAL team up to promote SAF development in Japan

All Nippon Airways (ANA) and Japan Airlines (JAL) have pledged to work together to promote Sustainable Aviation Fuel (SAF), in view of the industry’s long-term objective of achieving carbon neutrality by 2025.

In a joint report on the outlook for the development of SAF in Japan, the two carriers note that SAF production is not as advanced in Asia as in Europe or North America, but that the region’s SAF market should eventually reach Y22 trillion ($197 billion). 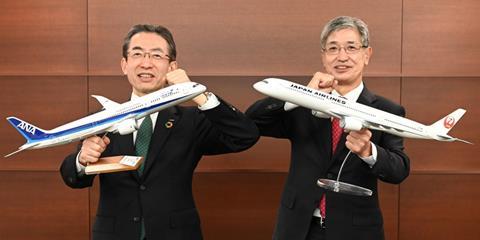 According to the carriers, global SAF production amounts to less than 0.03% of total demand, creating an urgent need for production and utilisation.

“In order to achieve their ambitious environmental goals by 2050, airlines must accelerate the technological development, production, and utilization of SAF through heightened cooperation and collaboration with industries that are connected to the aviation sector, as well as targeting SAF use of at least 10% by 2030,” say the two carriers.

By 2050, ANA and JAL estimate that the maximum amount of SAF needed in Japan will be roughly 6.1 billion gallons. This is based on growth forecasts for air travel demand.

In a table, the airlines indicate that fossil fuel will continue to power the airline sector throughout the 2020s, with SAF making up 10% of fuel by 2030. Only after 2030 will SAF start to make a major impact on overall fuel use, with SAF fully replacing fossil fuels by 2050. 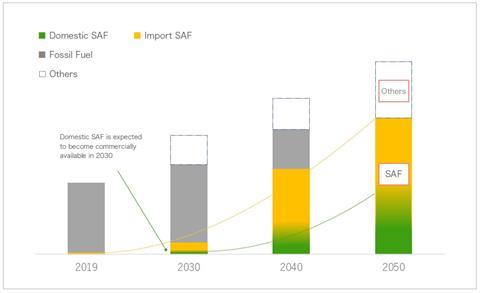 In 2050, they foresee point, Japanese airlines will rely on a roughly equal mix of imported and locally produced SAF. While Japan’s Green Innovation Fund has supported the development of SAF, the alternative fuel has yet to be commercialised.

“After domestic SAF is expected to become commercially available in 2030, it will be important to implement policies that increase self-sufficiency from an energy security policy perspective, instead of simply relying on imports from Europe, the United States and China,” say the two carriers.