Government grants and subsidies have kept Australia’s Regional Express afloat, the company says, and it expects regional aviation to return to normalcy within two years.

The Rex Group managed a marginal 1.3% increase in revenue for the fiscal year (FY) ended 30 June, as government grants and subsidies mitigated the impact of Covid-19, a 31 August disclosure to the Australian Securities Exchange about its preliminary results for the period indicates. 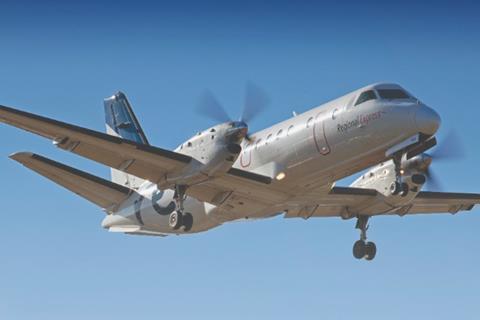 A Saab 340 operated by Regional Express

“Even Rex, which had virtually no debt and strong cash flow in the past, was brought to its knees with passenger numbers plummeting 90% between 15 March 2020 and 28 March 2020,” executive chairman Lim Kim Hai said in the disclosure, adding that passenger revenue declined by A$65 million ($48 million) in the April to June period.

In April, the group’s regular passenger transport (RPT) network shrank by more than 80%, before the government stepped in to underwrite a minimum essential service to every regional port in its network, a scheme that is currently ongoing.

“Rex makes a solemn promise that it will give back to the community in the future when it is strong again,” says Lim.

“Rex believes that regional aviation will recover much sooner than the domestic or international sectors and, barring further waves of outbreak, Rex sees regional aviation returning to normalcy within two years.”

For the whole of FY 2020, Rex’s revenues from passenger, freight, charter, as well as other passenger services and amenities, declined by 20% year-on-year to A$245 million.

Cushioning the revenue impact was A$62.1 million in government grants and subsidies targeted at boosting regional carriers’ liquidity, including subsidies from Australia’s “JobKeeper” scheme. This resulted in a 1.3% increase in FY 2020’s total revenues to A$322 million.

In line with reduced operations, salaries – the largest cost component – were down by 7% to A$104 million. Fuel costs, along with flight and operation costs, came in at A$85 million collectively, 15% lower.

Despite that, total costs and expenses rose 18.5%, on the back of a significant increase in engineering and maintenance costs – up 22% to A$56 million – and a A$62 million asset impairment charge, among others.

The company also commented on its plans to commence domestic jet operations in March 2021.

“We believe that Australia deserves an alternative domestic carrier that is safe, reliable, convenient, affordable and, most importantly, one that can go the distance against the Qantas Group,” executive chairman Lim says.