China has rolled out a raft of measures – from financial support to infrastructure investments – for the country’s aviation industry, which has been hit by the coronavirus outbreak.

In total, the Civil Aviation Administration of China (CAAC) announced 16 measures, all of which are aimed at “promoting the stable development” of the sector. It did not disclose how much these measures, taken together, are expected to cost. 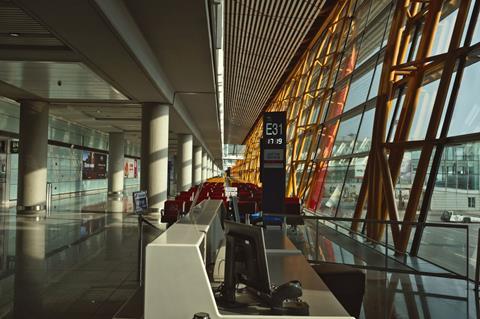 In terms of financial support, the CAAC will provide subsidies to Chinese carriers, and provide additional funding support for international services. During this period, the CAAC is also waiving the civil aviation development funds that airlines have to pay.

The CAAC will also reduce the airport parking and air control fees for all carriers. For Class 1 and 2 airports, take-off and landing charges will be cut by 10%, with parking fees waived. The fee reductions have already been put in place since 23 January, the CAAC notes, and will remain in force until further notice.

China will also double down on infrastructure investment, with a target of CNY 100 billion ($14.4 billion) in fixed asset investment for the rest of the year. A key priority for the agency will be to support the resumption of infrastructure works, most of which were halted due to the outbreak.

At the same time, CAAC will use the civil aviation development fund to “better support airlines in improving their safety capabilities”. These include investing in security, flight monitoring, satellite navigation, and other areas.

On the air transport management front, the CAAC will “optimise” the management of route and airline licensing. To this end, the administration will adjust its quota in line with market demand. It has extended the 2019/2020 winter schedule to 2 May, while suspending its routine assessment of an airline’s on-time performance.

The CAAC will also aim to simplify administrative procedures – and cut down processing time – for new route applications, as well as the reinstatement of suspended international routes.

China’s latest move comes days after it launched a funding scheme aimed at incentivising domestic and foreign airlines to continue or restore services.

The reward scheme is split into a CNY0.0176 per seat kilometre reward for flights on routes served by multiple airlines, and a CNY0.0528 reward per seat kilometre for a route where the carrier is a sole operator. The policy implementation period covers 23 January to 30 June.

China, which was the epicentre of the coronavirus outbreak, has seen international services slump in recent months. Many international carriers began suspending services to mainland China in late January and have since suspended flights through February and March, with several pushing these suspensions into April. Chinese carriers too have been forced to suspend or reduce services on their international networks.