Israeli flag-carrier El Al has detailed an agreement for funding support from the government and its controlling shareholder, Kanfei Nesharim, which includes a commitment to a share offering by mid-September next year.

Under the 22 November agreement Kanfei Nesharim will provide El Al with $63 million through four loans. Three of these – sequentially for $25 million, $18 million and $7 million – will take effect before the end of November, while a fourth for $13 million will be provided by the end of February 2022.

These loans can be converted into capital at any point.

El Al had previously intended to undertake a $105 million share offering to raise capital, with Kanfei Nesharim contributing $43 million, but this had been postponed.

The new agreement states that the share issue will take place no later than 19 September 2022. It points out that the first two of the four shareholder loans total $43 million and will be considered as meeting Kanfei Nesharim’s obligation for the offering. 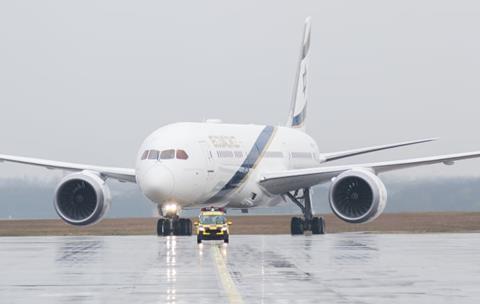 Once the first three loans have been provided, by 30 November, the government will transfer $7 million to the carrier, and it will hand over another $13 million once the fourth loan is in place. This government support, in the form of debt, can be converted into equity after three years.

El Al will have an option, until 30 June 2022, to require Kanfei Nesharim to provide an additional loan of up to $10 million. If this option is exercised, the government will provide further state aid matching the figure.

As a result, the government will be offering up to $30 million in total support to the airline.

Only after the company raises more than $62 million in the share offering will it be entitled to repay the first and second loans, but the agreement says these two loans should be repaid at the earliest possible date. The third and fourth loans will be repaid by 31 December 2025, as long as the repayments do not violate provision of the agreement.

El Al says it will also raise a loan of at least $100 million against its frequent-flyer programme by the end of January 2022, and its board has decided that it will sell a “significant portion” of the scheme.