Eurocontrol’s baseline expectation is that there will be no return to normal routings through Russian or Ukrainian airspace by the end of its 2028 traffic forecast window.

The European network manager outlined that assumption on 17 October as it released an updated pandemic recovery report covering the period 2022-2028, which shows that the war in Ukraine has combined with operational issues at some airports to weigh on flight numbers more significantly than it expected only four months ago. 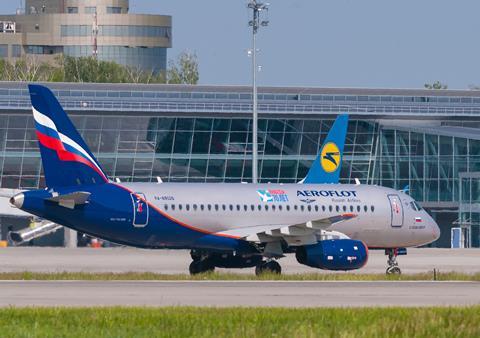 Aside from airspace restrictions, the effects of the war in Ukraine include “weak” GDP growth and rising energy prices, Eurocontrol states, alongside the impact of inflation on air travel demand.

“Uncertainty remains very high, with risks skewed to the downside,” it says of the outlook. 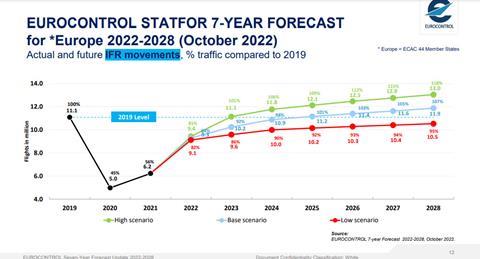 The recovery trend has been downgraded

“We have seen strong demand this summer but this has been held back, both by the capacity of the sector to handle the rapid growth and also by the impact of the war in Ukraine,” says Eurocontrol director general Eamonn Brennan.

“We are optimistic about traffic recovering to around 92% of 2019 levels next year, but there are still significant downside risks that could affect the recovery.”

Eurocontrol says that alongside the impact of the war in Ukraine, more operational disruption relating to staffing issues cannot be ruled out for 2023.

But it also cites “relatively good passenger confidence” coming out of the pandemic.

The airspaces restrictions relating to the war in Ukraine also cover Belarus and Moldova, Eurocontrol notes, and have brought about a reduction in overflights of the Baltic region, Scandinavian states and Poland, with routings via southeast Europe rising.