Kenya’s government has stepped in to pay Kenya Airways debts after the airline defaulted on a loan agreement for aircraft and engine acquisitions.

The government is also set to take over the loan in the current 2022-23 fiscal year, according to the country’s treasury.

In an annual public debt management report for 2021-22, the treasury states that Kenya Airways had previously borrowed $841.6 million from the US Private Export Funding Corporation.

The 10-year loan, initiated in 2017 and running to fiscal 2027-28, was obtained to purchase seven aircraft and a single engine.

It was guaranteed by the US Export-Import Bank and, in turn, the Kenyan government – which is obliged by law to guarantee loans for state-owned enterprises. The treasury says the guarantee amounted to $525 million.

At the time the agreement more than doubled the total Kenyan government’s publicly guaranteed debt. 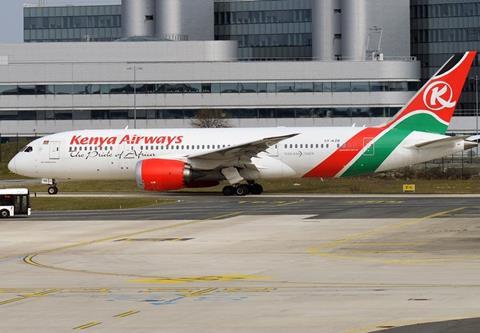 Kenya Airways’ loan will be novated to the government

But in its latest debt management report the treasury says Kenya Airways has “defaulted” on both the guaranteed and non-guaranteed portion of the loan.

“[The airline] has experienced cash-flow challenges in the past which were exacerbated following strict Covid-19 containment measures that cut down business operations and global travels,” it adds.

Kenya Airways’ guaranteed debt was “called up by lenders” and after the airline sought government intervention, the treasury states, a cabinet decision was made to pay the carrier’s loan arrears and move the loan balance directly to the government.

“The arrears have been paid and the [loan transfer] process is ongoing,” says the treasury, adding that it expects to finalise the novation in the current fiscal year.

Loan repayments conducted by the government on Kenya Airways’ behalf are to be recovered through a subsidiary loan agreement between the government and the airline.