While much has changed across the aviation landscape in the past two decades, industry leaders calling for air traffic control reform in Europe is not one of them.

Glacial progress in implementing the Single European Sky amid political deadlock means most executives have grown weary of the prospects of real progress.

“I don’t think we’ll ever see it, but it is a disgrace,” said Willie Walsh during a panel debate at Eurocontrol’s Where to Next for European Aviation conference in Brussels on 4 October. “We will be lectured as an industry by politicians who will say we have to improve our performance, and the same politicians will do nothing to the structural inefficiency that exists in Europe because the political will isn’t there.” 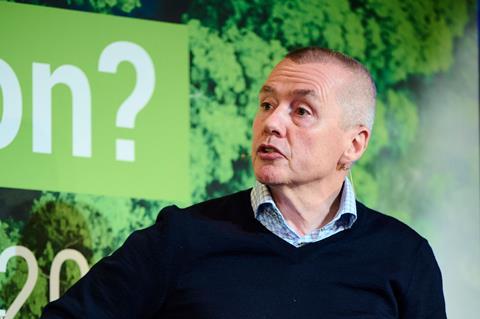 Walsh says stakeholders are aligned and heading in the right direction

What has shifted over time is the weight of the drivers for change. And the role ATC reform could play in cutting CO2 emissions has grown more pertinant.

Further focus has turned to how states can help aviation reduce its emissions after governments agreed a long-term aspirational goal to achieve net-zero emissions for flights by 2050 at the recent ICAO assembly. Industry figures hope this will provide impetus, particiularly to upscaling production of sustainable aviation fuel (SAF), which will be a key driver in meeting this goal.

Speaking on the same panel as Walsh, held three days before ICAO adopted its goal, Aercap chief executive Aengus Kelly suggests it may be logical for European states to tackle ATC reform as a priority, given the size of the challenge to transition the industry to new technology and to upscale SAF production.

”Today there are about 23,500 large commercial aircraft in the world. 70% of those aircraft are currently using technology from the 1990s. Less than 30% of today’s fleet has the new technology engines onboard that burn less fuel,” he says.

”Boeing and Airbus, on a good day, would probably make 2,000 aircraft a year, and we are a long way from that happening. If anyone thinks that this industry can transition into the most fuel efficient type of aircraft that are currently available by the end of this decade, they are wrong.”

As a result, he says states should look at what can be done to enhance the position of the industry before the technology is rolled out.

“Could we cut 10 minutes off the average stage length of a flight in five years – is that possible in air traffic control?” he asks. “That comes back to looking at stuff a bit closer to home, that is maybe a bit more painful to tackle.”

Kelly’s call for action was echoed by Walsh. ”There is not much point in having the most efficient aircraft, if it is being operated in an inefficient manner. It’s crazy we are still operating the aircraft today the way were in the ’70s. And we saw that [during the pandemic] when we were able to operate the aircraft efficiently, because there were fewer aircraft flying, then we were really able to measure the difference.

”So let’s deal with the structure of inefficiency, so we can maximise the efficiency of the aircraft that are flying today.

”If we are genuine about addressing sustainability, we have to address every aspect of it. We know today that 10-12% of CO2 would be avoided in Europe if we had a more efficient ANSP structure.”

While Walsh was speaking before the ICAO resolution, he was already highlighting that the issue of sustainability was moving in the right direction among states – even if  some, notably China, retain reservations.

”The positive is pretty much everybody is aligned and heading in the right direction,” he notes. “The most important thing was to agree a long-term aspirational goal. Now even the title, long-term aspirational goal, is underwhelming, but the good thing is the industry has already come together and said we are going to achieve net zero in 2050, and personally I think we will do that ahead of time, because I think pressure will be on to do that early.

“It will be tough to get there, but without question we will get there,” he adds, though noting there will be a price to pay for decarbonisation.

”It is going to cost a lot of money and the transition from where we are today to 2050 is going to be tough and expensive and it will be reflected in ticket prices. Without question, prices will increase as a result of the challenge to decarbonise the industry.”