Qatar Airways has emerged as the victor in a court case against Italian airline seat manufacturer Optimares, over the termination of contracts for design and supply of seats for Boeing 777-9, 787-9 and Airbus A321 jets.

Optimares had argued, at the UK’s High Court, that it had incurred “millions of euros” in costs and was “on the cusp” of delivering shipsets when Qatar Airways served termination notices on 23 March 2020.

But the Middle Eastern carrier countered that Optimares had experienced “numerous delays” prior to the termination.

The judge in the case pointed out that this dispute did not matter because the purchase agreements conveyed “clear terms”, and dismissed Optimares’ claim, instead awarding Qatar Airways the return of non-recurring costs for the seat design.

Optimares had failed to start delivering the 30 shipsets of the 787 contract by the agreed dates in January and February 2020, and the ruling states that the relationship between the two sides had “broken down” by this point.

Qatar Airways subsequently looked to place the 787 contract elsewhere, notably with Boeing-linked Adient Aerospace. The judge did not accept Optimares’ suggestion that the contract was terminated purely on the grounds of obtaining a lower price from Adient.

Optimares had notified Qatar Airways of an “excusable delay” on 22 March 2020, citing the outbreak of the Covid-19 pandemic and the Italian government’s lockdown mandate which, the seat manufacturer said, meant it could not meet the terms of the purchase agreement. 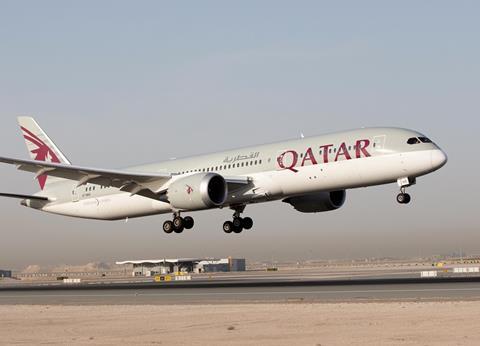 While Optimares had argued that the termination right was not available when an ‘excusable delay’ had been invoked, the judge did not agree. Qatar Airways still had the right to terminate for convenience.

The airline’s exercising this right was “unsurprising”, says the ruling, adding: “That cannot be said to be a bad faith action on its part.”

It acknowledges that the terms of the purchase agreement were “clearly favourable” to Qatar Airways which “no doubt had the whip hand in the negotiations”.

But it stresses that Optimares was “keen” to enter the agreement and “made the choice” to contract on those terms.

While such weighting in favour of the airline imposed “significant risk” on the supplier, it adds, the imbalance was envisaged by both sides at the time.

“The contractual arrangements are clear and it is not for this court to rewrite the parties’ bargain,” the ruling states.

It says the court must identify what the parties agreed – not what it thinks they should have agreed – and avoid attempting to “assist an unwise party [or] penalise an astute party”.

“Commercial common sense is not to be invoked retrospectively,” it says. “The mere fact that a contractual arrangement, if interpreted according to its natural language, has worked out badly, or even disastrously, for one of the parties, is not a reason for departing from the natural language.”

The airline unveiled its 787-9 business-class cabin, with the Adient seats, last year.

Its legal representatives state that Optimares’ claims of around $20 million were rejected and the company was ordered to repay nearly $2.5 million to the carrier.

“Qatar Airways made every effort to settle this matter out of court,” the airline says, adding that the negotiated terms were “always clear”.

“We were therefore disappointed when Optimares decided to issue and pursue these proceedings and we are pleased that the court decided in our favour.”