Neste and Shell team up to produce sustainable aviation fuel

Finnish sustainable aviation fuel supplier Neste is teaming up with petroleum heavyweight Royal Dutch Shell to “significantly increase” the supply and availability of the lower-emissions fuel for the commercial aviation industry starting in October.

The agreement comes just over a month after the Helsinki-based company began supplying three of the USA’s biggest airlines with renewable jet fuel at San Francisco International airport. 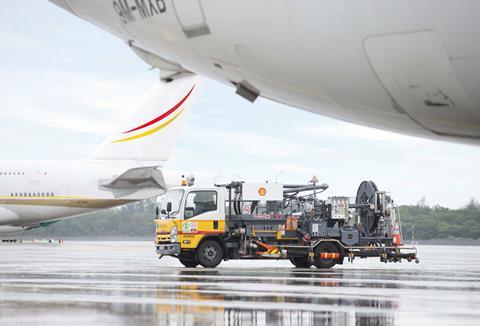 Neste says that its sustainable fuel reduces greenhouse gas emissions by up to 80% compared to fossil jet fuels, and thus helps airlines achieve their sustainability targets.

The aviation industry, which, prior to the coronavirus pandemic, accounted for about 3% of global man-made CO2 emissions, has committed to sustainability goals under an ICAO-led framework called the Carbon Offsetting and Reduction Scheme for International Aviation.

Neste has said that its global sustainable aviation fuel capacity is currently 100,000 tonnes (220 million pounds) or 129 million litres (34 million USgal), and it is working towards being able to produce 1.5 million tonnes or 1.9 billion litres per year by 2023.