The carrier says that it did not meet two of its three financial targets for the fiscal year ended October. While “financial preparedness remains strong”, Gustafson describes an 8% return on invested capital as “disappointing” and notes that the ratio of adjusted net debt to EBITAR increased.

“This outcome is not satisfactory and reinforces the need for additional efforts to improve our operational efficiency and competitiveness,” he states. 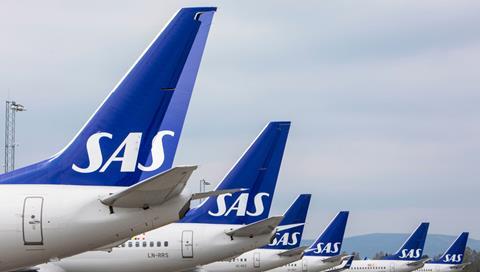 Some SKr120 million has been set aside to cover restructuring costs, as the airline aims to “accelerate the automation of administrative tasks to reduce overhead costs”.

Gustafson expects that SAS’s ongoing narrowbody fleet harmonisation programme around the Airbus A320neo family will deliver “significant benefits”, and that “some” efficiencies will materialise from 2021 as a result of reduced standby levels and maintenance cost. But he argues that “productivity will be negatively impacted in the forthcoming years” as a result of staff-training requirements for the Neo.

SAS’s Stockholm Arlanda station will in 2021 become its second all-Airbus base, after Copenhagen.

A new planning system is to be implemented by 2022 to improve asset and crew utilisation. The airline predicts that the initiative will in 2020 deliver savings of SKr75 million and improve “operational robustness”.

SAS says it experienced “strong momentum” in demand during the fourth quarter of 2019. Income before tax increased to SKr1.1 billion – from SKr789 million – on revenue up 6% at SKr13.5 billion, driven by 2.3% rise in passenger numbers.

However, the improved earnings were partially offset by unfavourable currency effects, the carriers says.

SAS sees “the continued weakness of the Swedish and Norwegian krona against the US dollar and the euro”, an increased fuel bill and costs relating to industrial action as “significant headwinds” that brought an overall decline during the year.

As the exchange-rate situation is to remain challenging, he foresees “significantly lower growth, both from a demand and a supply perspective”.

He expects a higher first-quarter loss.