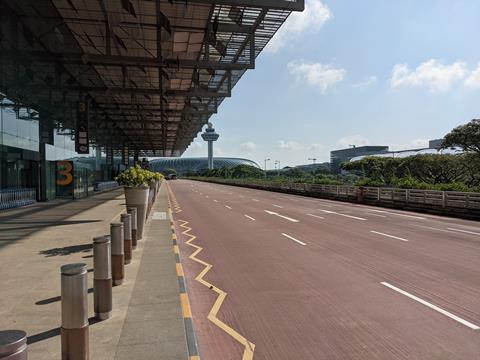 The drop-off point of Changi Airports Terminal 3 on Monday 26 April.

Owing to low activity in May 2020, the latest report shows significant year-on-year increases.

Across carriers, the group’s passenger capacity, as measured in available seat-kilometres, was almost eight times the year-ago period, and revenue passenger-kilometres nearly 13 times of May 2020 levels. Passenger load factor gained 5.7 percentage points to 14%.

Full-service carriers SIA and SilkAir’s carried 101,700 passengers in May 2021 versus 9,000 in May 2020. The group states that operating statistics for both carriers were combined in view of the ongoing integration of SilkAir into Singapore Airlines.

Collectively, SIA and SilkAir’s passenger capacity in May was eight times that of the year-ago period, and revenue passenger-kilometres was over 12 times. Passenger load factor gained 5.5 percentage points to 15%.

Low-cost carrier Scoot carried 17,900 passengers compared with 600 passengers in May 2020. Its capacity was seven times of the year-ago period, whereas revenue passenger-kilometres was 25 times May 2020 levels. Passenger load factor gained 6.6 percentage points to 9.3%.

At month-end, SIA Group operated widebodies and narrowbodies in its full-service network, to 49 destinations including Singapore.

Scoot served 24 destinations including Singapore, following the reinstatement of flights to Athens, Kuala Lumpur, Indonesia’s Manado as well as Clark and Cebu in the Philippines. Operations to West Asia remained suspended.