Singapore Airlines Group has made significant changes to its order book– by swapping Boeing 787-10s for more 777-9s – in a move that sees it defer more than S$4 billion ($3.01 billion) in capital spending by about three years.

The group states that it will also delay delivery of a number of aircraft, “with the delivery stream spread out beyond the immediate five years”. 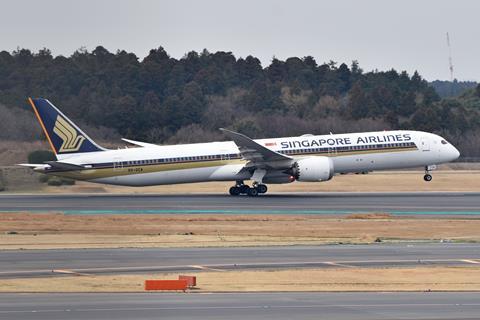 The swap in orders will allow SIA Group to “respond to changes” in its projected long-term fleet needs beyond its 2025 financial year.

The announcement comes after it formally reached agreements with both Boeing and Airbus to “revise” its delivery schedule, though it did not indicate a timeline.

Taken together, the group expects to defer S$4 billion in spending between 2020 and 2023 to later years.

“It would also recalibrate the rate of introduction of capacity, following the disruption to the demand for air travel as a result of the Covid-19 pandemic,” SIA Group adds.

According to the latest projected expenditure for the next five financial years, the group is expected to halve its aircraft expenditure in its 2020 financial year, which ends on 31 March 2021, to S$2.8 billion from the originally planned S$5 billion.

It also cut aircraft spending for the 2021 financial year by about a third, from S$5.4 billion to S$3.7 billion.

In November 2020, the group disclosed that its discussions with Boeing on aircraft deferrals had reached an advanced stage, while it confirmed that its outstanding Airbus aircraft on order had been postponed.

Of the SIA Group’s 185 aircraft, only 64 passenger jets and seven freighters are in service, with 123 jets parked. Passengers carried fell 97.5% in the last three months of 2020.