A steady increase in cargo revenue helped Indian low-cost carrier SpiceJet narrow its quarterly operating loss, even as passenger travel demand remains in the doldrums amid the coronavirus pandemic.

For the quarter ended 30 September, the carrier reported an operating loss of Rs1.06 billion ($14.2 million), significantly lower than the Rs6 billion loss it reported the previous quarter. 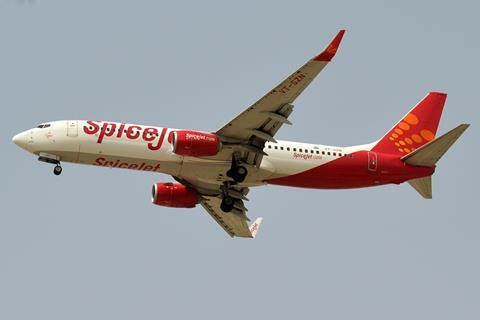 SpiceJet narrowed its quarterly operating losses, helped by an increase in cargo revenue.

Year on year, the loss was also lower: during the same period last year, SpiceJet racked up an operating loss of Rs4.6 billion.

Revenue for the period fell 62% year on year to Rs10.7 billion, led mainly by a decline in passenger traffic revenue.

However, a surge in freight and logistics revenue helped offset the revenue decrease. Year on year, SpiceJet saw its cargo revenue increase more than five-fold to Rs2.3 billion. Compared to the previous quarter, it represented a 37% jump.

Expenses for the period fell about 60% year on year to Rs14.2 billion. SpiceJet adds that the ongoing Boeing 737 Max grounding has led to costs of around Rs1.4 billion for the quarter.

The carrier reported a net loss of Rs1.06 billion, which was an improvement from the Rs4.6 billion net loss it reported last year.

SpiceJet chairman and managing director Ajay Singh says the carrier will continue to expand its cargo business, tapping into burgeoning demand in the sector.

Since late March, SpiceJet has operated nearly 10,000 cargo flights, carrying 76,500t of freight. The carrier utilises a fleet of 17 aircraft to operate cargo flights, and has a cargo network of 63 domestic and 44 international points. 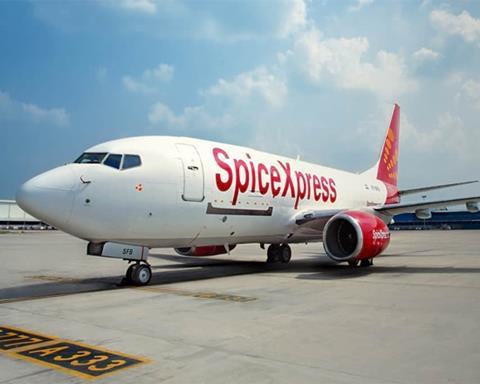 SpiceXpress is the freight arm of SpiceJet

To help bring costs down, the carrier discloses that it is renogotiating lease contracts and is reassessing its maintenance provisions. “The group has assessed its liquidity position for the next one year, is in negotations with lenders regarding deferrment of dues and other waivers, and also assessed the recoverability and carrying values of its assets,” adds SpiceJet.

It did not provide a forecast for the full financial impact of the coronavirus pandemic, citing high uncertainty in the operating environment.