In an interview with Bloomberg television, Ong described the tradeoff leaders faced in March, when covid-19 was less understood and there was a shortage of testing capacity. 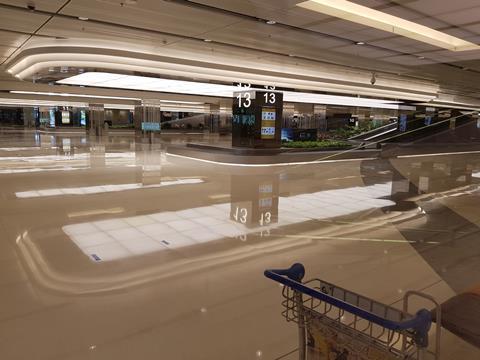 The baggage belts of Singapore Changi Airport’s Terminal 1 are quiet amid the coronavirus crisis.

In March, Singapore could only conduct 2,000 tests daily, mainly in hospitals or for acute cases.

Singapore still faces the same tradeoff, but it is less stark given that the virus is well under control locally, with negligible transmission rates, and testing capacity is no longer as much of a constraint, with Singapore conducting 30,000 tests daily, going up to 40,000 in November.

“A good proportion [of tests] will be dedicated to airport usage, and the airport will set up its own dedicated test lab,” says Ong. “With this we can strike a better balance between travel and epidemic control.”

He acknowledged that the coronavirus pandemic has been extremely challenging for Singapore Airlines and Changi Airport.

On the decision to stop development of the planned Terminal 5 for two years, Ong said that the assumptions behind the plan have “totally changed.”

Moving forward, he said the country plans to gradually open its borders and keep air links with key destinations.

“We can’t wait around for the vaccine to happen,” he says.

He adds that a widely available vaccine is essential, and that this could happen in one year to 18 months.

“When there is a vaccine and it is widely available around the world and people gain confidence to travel again and visit other countries, then we’ll have aviation almost fully on his feet again. How long would that take? I can’t make a guess. I would say minimally a couple of years.”