Vietnam’s IPP Air Cargo is abandoning its launch plans, apparently due to concerns about weakening demand for air cargo and an uncertain economic outlook.

According to media reports from Vietnam, the board of Imex Pan Pacific Group (IPP) – IPP Air Cargo’s parent – decided on 26 October that it would drop plans to launch the carrier, and has notified Vietnam’s transport ministry that it seeks to end the licensing process. 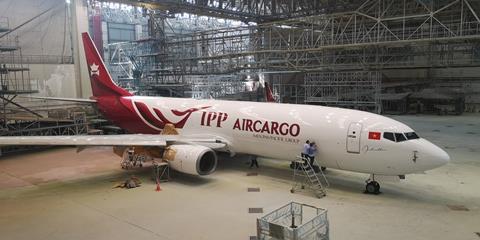 IPP Air Cargo was understood to be very close to launching with four Boeing 737-800BCFs converted by GAMECO.

“Thus we have decided to end our plan to avoid causing more damage to carriers that are already making losses,” he is quoted as saying.

He also held out the possibility that, in the future, IPP might revisit the launch of an air cargo operator.

FlightGlobal has reached out to luxury group IPP for comment.

IPP Air Cargo’s ownership might also have been an issue. In recent months media reports from Vietnam have indicated that there were possible licensing concerns around the nationalities of the carrier’s owners - specifically owners who might have dual citizenships.

In August, industry executive Brian Thomas Hogan – who was advising IPP Air Cargo at the time – posted on social media that the first 737-800BCF conversion had been completed, with a second underway, and a third and fourth to follow.

In 2021, IPP said that the launch of the cargo operation would entail the investment of $100 million.