European NATO nations could access spare capacity on the UK’s Airbus A330 Voyager tanker/transport fleet, under an initiative being promoted by the industrial consortium responsible for providing the aircraft.

Detailed by AirTanker chief executive Phill Blundell, the proposal would allow the UK’s allies to use part of a “surge” fleet of five Voyagers, which will be supplied between early next year and mid-2016. These will follow a core inventory of eight converted aircraft in use with the Royal Air Force, and another operated by AirTanker crews on the civilian register.

One of the programme’s spare aircraft has already been placed with Thomas Cook Airlines from May 2015 under a three-year agreement, but the remaining four have yet to be placed with the commercial sector.

Pointing to a critical shortfall in air-to-air refuelling capacity outside the USA, Blundell says: “There is a significant demand for the sort of capability that Voyager offers, over and above what the UK would wish to use on a day-to-day basis.” 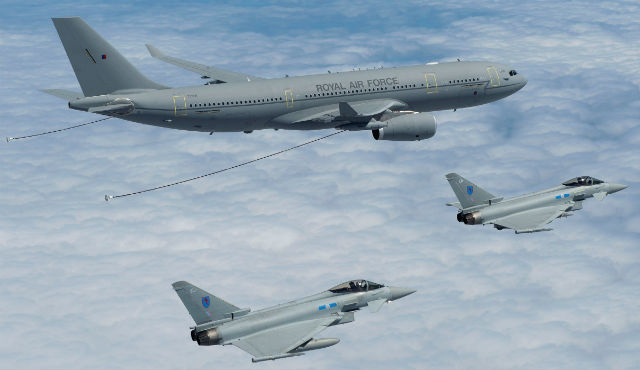 With AirTanker hoping to see the offer of spare capacity raised by the UK during the NATO summit in Newport, Wales in early September, Blundell says: “How do we make sure we get more value out of this project than has been anticipated?”

“Surge fleet aircraft could be released by AirTanker to partner nations on a ‘dry’ or ‘damp’ lease basis,” the company says. Alternatively, access for airlift and refuelling tasks could be offered by the UK using existing NATO airlift co-ordination measures.

The European Defence Agency is examining the feasibility of a multinational tanker purchase using a pooling and sharing model, which Blundell says could be supported via access to the Voyager fleet. Aircraft could be used to provide crew training services or an interim capability before a procurement can be completed, he says.

“Voyager represents a highly plausible opportunity to meet the requirement for NATO tanking and air transport capacity through some form of pooling and sharing agreement,” Blundell says. A refuelling boom could potentially be added to an aircraft within a conversion period of roughly six months if requested, he adds.

Meanwhile, the RAF on 30 July formally declared its core Voyager fleet fully operational. Marked during a ceremony at its Brize Norton base in Oxfordshire, the milestone represents “the transfer from programme delivery to service delivery, with all major clearances in place”, says Air Cdre David Lee, air officer air mobility.

A 10th A330 will arrive at Brize Norton in the coming weeks, with its arrival enabling the programme’s seventh example to undergo conversion to the military standard.

AirTanker says almost 14,000 flight hours have been recorded with the Voyager fleet since December 2012, with the type being used for passenger and freight transport, along with in-flight refuelling tasks.

In the latter application, the RAF’s KC2 and KC3 models are cleared to refuel its Eurofighter Typhoon and Panavia Tornado GR4 strike aircraft, and Lockheed Martin C-130J tactical transports.