American Airlines has unveiled a new "soaring spirit" livery for its fleet, retiring the iconic eagle logo that has adorned its aircraft for more than four decades. 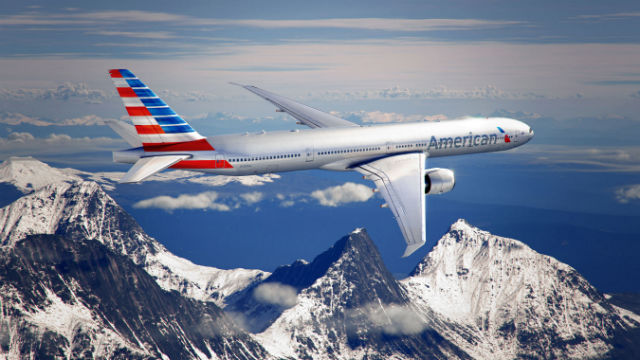 The new branding includes a matte grey fuselage with a red and blue stylised "A" with the remnants of the eagle ahead of "American" written in large letters across the forward passenger windows and exit doors. The tail is a striped red, white and blue American flag. It drops the word "Airlines" from its aircraft with the livery.

Virasb Vahidi, chief commercial officer at the Fort Worth-based carrier, says that the new livery reflects the airline's "welcoming spirit" with proud red, white and blue stripes on the tail, and an updated stylised eagle, in a statement.

The airline says that one Boeing 737-800 has been painted in the new livery and its two Boeing 777-300ERs will be painted ahead of the inaugural flight from Dallas-Fort Worth to Sao Paulo on 31 January.

Reaction to the livery on twitter has been largely negative. "The new American livery looks like the spawn of a three-way between a regional airline, a 1970s charter airline, and a third-world airline," said Henry Harteveldt, a travel industry analyst at Hudson Crossing, in a tweet.

The red, white and blue tail is also reminiscent of that of former US regional carrier Colgan Air.

During a follow-up call, Harteveldt says: "Its really unimpressive. I know American Airlines wants to have a contemporary look and feel, that they want to relate to future generations of travellers, but I don't think this identity hits the mark."

"There is nothing wrong with American's current corporate identity," he adds. "I think it is classic like a Chanel dress."

Not everyone dislikes the new livery. "It's clean and modern," says Mary Kirby, editor in chief of the Airline Passenger Experience magazine in a tweet. "I like it."

American's new image is not set in stone. British Airways abandoned its Utopia tail fins in 2001 after they proved controversial during the four years after they were introduced, and Delta Air Lines revamped its livery in 2007 after less than a decade with a ribbon-like image on its aircraft tails.

"American has a history of not listening to the public," says Harteveldt. "I think only if there is a merger and US Airways management says no [to the livery] will they walk away from it."