Arianespace chairman and chief executive Stéphane Israël likes to talk about change. Ironically, he has spent most of his career in the hallways of European industrial policy, including a stint as the first advisor to Louis Gallois, the former head of EADS, and in leadership roles in space unit Astrium. He also spent some time as the chief of staff to the French minister for industrial renewal, and has published papers about industrial policy.

Israël spoke with Flightglobal in Singapore in the wake of an announcement that may eventually be viewed as a pivotal change in European space policy. Just a day before, Israël had attended a meeting in Paris presided over by French president François Hollande, at which Airbus Group and Safran spelled out their plans to form a 50-50 joint venture that aims to reshape the European launch vehicles business – by bringing together the these two leading industrial partners in the Ariane rockets programmes with Europe’s launch operator, Arianespace.

The stated objective of the venture will be to boost the efficiency and competitiveness of Europe’s launch industry by integrating concept, design, production, commercialisation and operation under a single corporate umbrella. That is an ambitious goal for an industry that works through multiple layers of contracts and control, ultimately driven by the European Space Agency but responsive to ESA’s 20 member states. But Airbus and Safran are the two biggest industrial players – Airbus is prime contractor for the Ariane 5 heavy lifter and its upcoming replacement, Ariane 6, and Safran is propulsion prime contractor – and together they holds 39% of Arianespace shares. On side also is France’s CNES space agency, which oversees Europe’s spaceport in French Guiana and holds a short 35% of Arianespace. 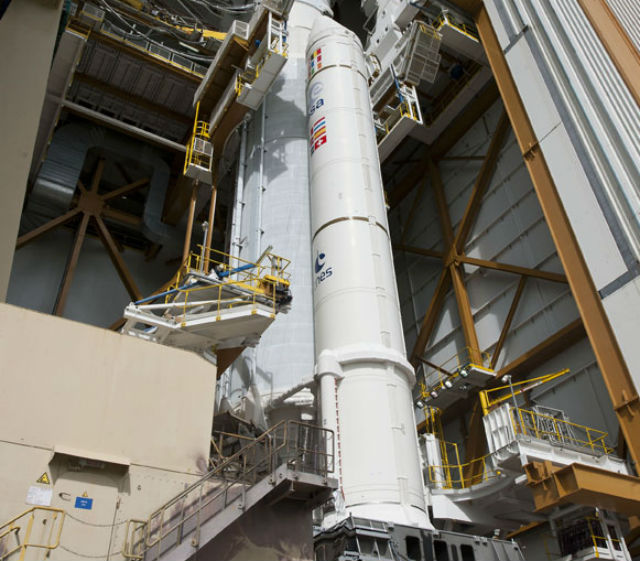 The rocket has been a huge success, with 59 launches achieved

Driving the joint venture is a sense of urgency in Europe. While Ariane 5 has been hugely successful, orbiting about half of the world’s telecom satellites and racking up 59 straight launch successes, it cannot go on indefinitely carrying a cost burden that has made profitability an elusive dream. What has focussed European minds is the fact that an upstart rival – Elon Musk’s SpaceX and its Falcon 9 launch vehicle – has begun operations at per-flight costs around half of Ariane 5’s.

Nonetheless, Israël downplayed the role of SpaceX in the Airbus/Safran announcement.

“We should neither underestimate nor overestimate SpaceX,” he says. “Competition is part of the game, so you make decisions as part of the European experience. There is a level of maturity in the European launcher industry that was reached some years ago, and we have a track record that SpaceX does not have. We should not always quote SpaceX when we make a decision, even though it is a matter of fact that SpaceX is part of the landscape. SpaceX comes with a very aggressive price and we must definitely react.”

He notes that, since its creation in 1980, Arianespace has chalked up 216 successful Ariane family launches, while SpaceX so far has managed three. Israël is determined to create an efficient organisation to protect that legacy. But by its nature, the launch industry is complex, so the challenge is a great one. Some 50% of Ariane production occurs in France, 20-25% in Germany, and 10-15% in Italy. There is also work done in Belgium, Switzerland, and Spain. Arianespace itself presently employs 330 staff directly.

“You can have an industrial footprint with many countries, but you can have leaner governance and simpler governance,” he says. “This is exactly what we are in the process of doing now in Europe. We want leaner governance with simplified contractual relationships between the players, because this will improve savings and agility.”

To move forward with the joint venture, Airbus and Safran will need to buy out the various other stakeholders, and they have already held discussions with CNES. Israël, as a manager, says he cannot comment on the decisions of shareholders, but says the consolidation of the company into a joint venture with two major shareholders will be a “very positive” development.

“The ambition is to have a new entity from development to commercialisation,” he says. “It will be a fully integrated entity, a fully consolidated entity.”

This new company will have a lot on its plate, namely the development of the Ariane 6 as well as reducing costs. The challenge facing Israël is working with company employees and Arianespace’s various shareholders to drive major change.

“Any business, to remain competitive, must change and adapt to the environment,” he says. “We are in a leadership position, but if we want to keep it we have to change by adapting ourselves and our governance. The success of the Ariane relies on the willingness of the public sector to fund it, and the excellence of the private sector to develop the rocket, sell the rocket, and operate the rocket.”