ANALYSIS: Airlines size up capacity at Gatwick and Heathrow

When Flybe sold its London Gatwick slots to EasyJet in 2013, it marked not only the almost complete departure of UK regional operators from the gateway but also a virtual disappearance of turboprops.

The departure of Flybe is part of a continuing trend of aircraft upgauging at the London gateway. October 2015 data from Flightglobal's Innovata schedules shows that turboprops, such as the Bombardier Q400s operated by Flybe, now account for just 0.5% of all equipment operated at Gatwick.

For the last seven years, during which Gatwick has reached within touching distance of 40 million passengers, narrowbody types have predominated over widebodies there by a fairly constant margin. This is apart from summer 2012's temporary spike in larger types, which could be related to a surge in demand during London's hosting of the Olympic Games.

Low-cost carriers have lifted their presence at the airport – notably EasyJet, which accounts for 42% of seat capacity from the airport in October, Innovata schedules show. 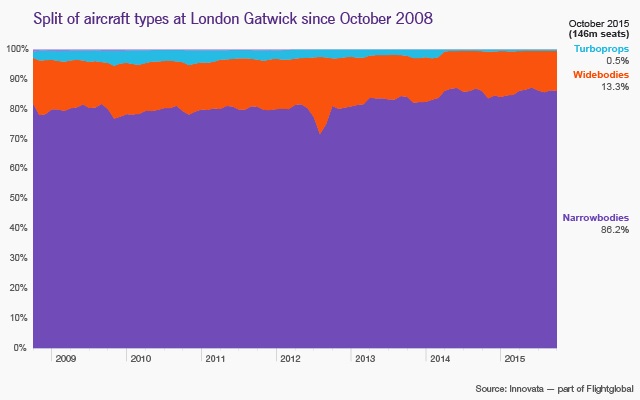 While narrowbodies predominate, a closer look reveals there has also been upgauging within the narrowbodies sub-class too. In October 2009, 85% of EasyJet's Gatwick operations were performed with Airbus A319s and the remainder with the larger A320s.

Six years later, 45% of the UK low-cost carrier's flights are operated with A320s and 55% with A319s. Much of this increase has come from a rise in the number of A320s operated by the Luton-based carrier rather than a reduction in A319 usage. 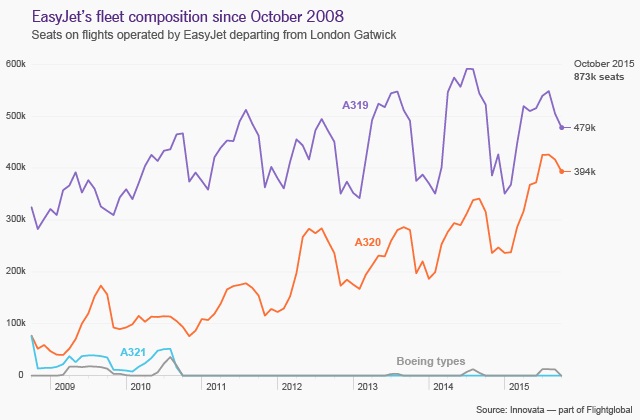 Flybe now operates the bulk of its operations to the capital from London City airport, and the airline's chief executive Saad Hammad blames this state of affairs on what he sees as an "intrinsic economic bias" in the way Gatwick allocates its slots, which he says leans "towards bigger aircraft".

He adds: "You see in some airports which are congested, airports have been tempted to think about their interests very narrowly, like Gatwick where [they] say: 'Okay, I have this number of slots, I want to get the highest bidders' – and those who are going to give me the most are the people with the highest volume of passengers per slot."

The airline chief sees the phenomenon of upgauging as closely linked to the lack of airport capacity in the UK's southeast and argues that if smaller operators are priced out of the market, connectivity between the UK regions and the capital suffers.

"You have to guarantee wherever you built this extra capacity in the capital, whether at Gatwick or Heathrow, you have to guarantee slots to regional operators at affordable prices. You can't have this per-plane pricing because people lose connectivity."

Gatwick's commercial chief Guy Stevenson acknowledges that there has been an upgauging of equipment at the airport over time but says other forms of growth have also been observed, such as air traffic movements growth and expansion into new markets.

"It is both, really. Take Emirates: they have moved from three daily [Boeing] 777s to three daily A380s. That's the most obvious example. We have seen some upgauging of Turkish over time, but that's mainly short-haul," Stevenson says.

"EasyJet have been upgauging, for example: they took over the Flybe slots. That was a natural change of gauge, just on those slots. So EasyJet is continuing to put more A320s in progressively. I think other short-haul airlines are also looking to increase their gauge."

While Gatwick has managed to grow both its passenger traffic and its air traffic movements despite the operational constraints of a single runway, Stevenson believes that this only makes the case for a second one "more pressing".

"When I see the opportunities over the next five to 10 years I see it as the highest-quality pipeline I've ever seen. So our campaign for a second runway is built on the expectation of quality demand coming through Gatwick airport," he says.

Upgauging is also in evidence at London Heathrow, although the interesting trends there have been in the widebody classes.

The number of Boeing 747s used at the airport has virtually halved since 2008, to 345,000 this October. The number of seats available on A340s has also fallen over time. 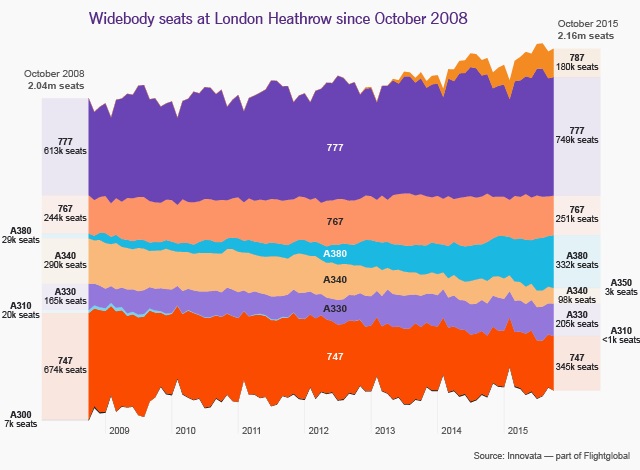 As aircraft capacity has increased there has been a reduction in domestic connections from Heathrow, as highlighted by the UK Airports Commission. In its final report published in July, the commission notes that domestic connections into Heathrow have fallen from 19 in 1990 to seven in 2014. It predicts that this will fall to three by 2040 without a third runway.

The number of domestic services into Gatwick has also fallen by more than quarter since 2010, even as the overall number of flights from the airport has risen by 9% over the same period.

Olivier Jankovec, director general of ACI Europe, says that the trend of upgauging at European airports since the economic crash of 2008 might take some of the pressure of congested gateways in the short term but is no long-term solution to capacity bottlenecks.

"It's a short-term fix. You can upgauge and you can fill your plane more and increase your load factors up to a certain point, and I think over the last few years you have seen airlines doing that consistently," he says. "But when you have load factors reaching 90-plus percent like EasyJet, there isn't much margin for extra gains on that front. So at a certain point in time if demand continues to be sustained, we will see airlines adding more flights and more capacity, not just by upgauging but by adding more movements."

Jankovec says this trend has taken place within the context of a concentration of traffic into primary airports, which he says is making it "more difficult for small regional airports and their communities" to maintain connectivity.

But Flybe's Hammad strikes a more positive note, stating that upgauging by the big low-cost carriers will produce opportunities for the smaller operators.

"Typically you see that with a low-cost operator like EasyJet or Ryanair, they are going for denser aircraft. That means that EasyJet is going from A319s to A320s and Ryanair going from their 737-800 series to 200-seat 737 Max [jets].

"That means there is more revenue risk, more capital risk on routes, and you need more thickness to make that worthwhile as an investment by these airlines. So either they are going to limit the frequencies they operate on those particular routes given the demand... or they are going to vacate those routes.

"In the meantime, that thin market that's available to the regional operators becomes more available, if you will, in terms of opportunity."