A visit to Bombardier’s newly-expanded Mirabel complex, just north of Montreal, does not give the impression of a company in crisis, although the past few months have seen a succession of grim news stories about Canada’s biggest manufacturer. Even local taxi drivers fret about the company’s problems and the effect major job losses would have on the economy in greater Montreal, long the country’s aerospace hub.

In the past year, Bombardier has replaced its chief executive, axed an entire organisational tier and hundreds of jobs, shelved a business jet programme – the Learjet 85 – and sold its military training unit. In addition, the aerospace and rail transportation group has faced speculation it will have to offload larger parts of the business and even join up with a major investor to stave off a cash crisis caused by the cost of developing both the delayed CSeries and two Global business jets.

However, in Mirabel, where the CSeries is being flight tested and built, there was a distinct joi de vivre about the factory when we visited. The reason was that the CS300 – the larger of the two CSeries variants represents three-quarters of the orderbook – was about to take to the air for the first time. On 27 February, the 135-seater joined four – shortly to be five – smaller CS100s in the flight test programme, with total airborne hours now well into four figures. 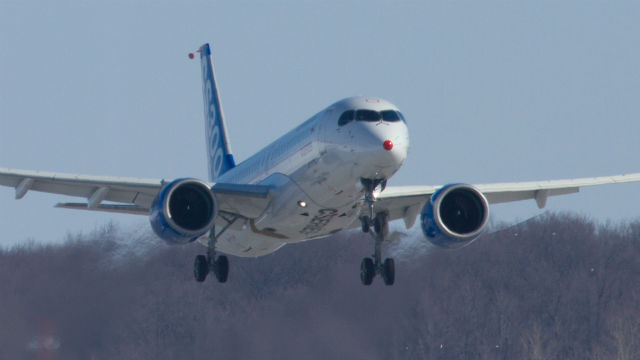 The fifth CS100 will be the first to fly with a full interior, while a second CS300, also with interior fitted, will join the flight test programme shortly. Together the two CS300s will have to complete around 800h of flight testing, as part of a total programme of 2,400h – some of this likely to be completed using a simulator. Bombardier has just finished full-envelope testing of the fly-by-wire system in normal mode and flown the aircraft at Mach 0.91 at 41,000ft. “We were only going to go to M0.89, but the aircraft handles really well, so we opened the envelope,” says Rob Dewar, vice president, CSeries.

Bombardier is still confident it can meet its final quarter certification target for the smaller variant with the CS300 following into service six months later.“The CS300 has not been so impacted,” says Dewar, of the delay that grounded the CS100 flight test fleet for 100 days last year. “In fact, we’ve shaved six months off the gap.” Bombardier had originally intended for the larger variant to enter service a year after its smaller sibling.

Away from the runway, preparations are under way for volume production of the two small Pratt & Whitney PW1500G-powered narrowbody airliners. The first production CS100, P1, is structurally complete and will begin flight testing in the autumn. P2, the seventh CS100 to be built, is in final assembly and P3 is at the beginning of assembly. “In the middle of this year, we will gate with our suppliers,” says Dewar. “They are all committed in terms of a one-year delivery schedule.”

The final assembly hall will have capacity for six aircraft, three on each of two lines, with capacity at full-rate production expected to be 120 aircraft per year, or nearly one every two working days. Despite the CSeries’s troubles, there is a clear sense of achievement among Bombardier executives about finally getting the first new narrowbody programme from a manufacturer other than the big two to this stage. From a gallery corridor two floors up overlooking the hall, Dewar smiles: “Two months from now that will be full, with six aircraft in final assembly.” 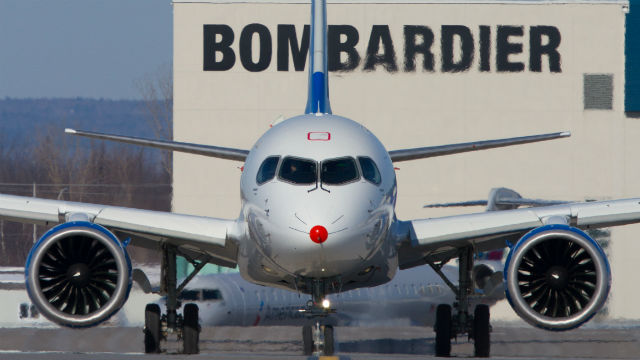 Delivering the aircraft to the certification authorities on schedule is one challenge. Another that will be equally causing Bombardier’s directors sleepless nights is reaching a sales target of 300 aircraft by entry into service, and keeping that momentum going as re-engined alternatives from Airbus and Boeing become available. Bombardier insists its all-new design will be more efficient than its rivals, but its first-mover advantage has been eroded by delays to the programme and the speed with which Airbus and Boeing responded to the CSeries launch with their re-engined A320 and 737.

The Airbus variant the CSeries competes the most closely with – the A319neo – is not selling strongly, despite Toulouse salesmen branding it a “CSeries killer”. However, what must worry Bombardier is that with just 243 firm orders as we went to press in mid-March (180 for the CS300), the aircraft has failed to drive a large enough wedge between the largest regional jets – especially Embraer’s E2 family – and the even more strongly selling re-engined larger narrowbodies from Airbus and Boeing. What Bombardier hoped would be a significant new segment has scarcely so far materialised.

Mike Arcamone, president Bombardier Commercial Aircraft, understandably continues to be bullish. Speaking to Flightglobal in his Mirabel office, he acknowledges that breaking the Airbus/Boeing duopoly was always going to be a challenge, but says the CSeries “speaks for itself” as a unique aircraft. “It is the only product in this market segment. We are beating our promises to our customers in terms of performance.” 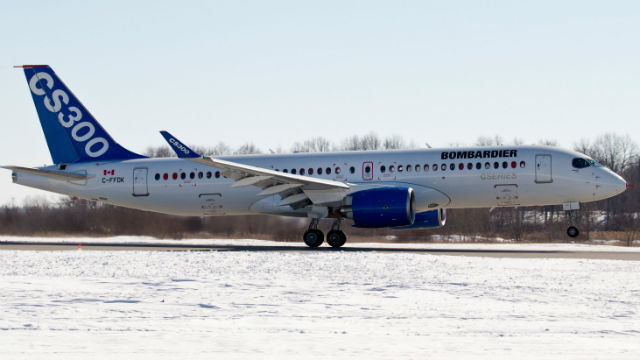 Flying the CS300 alongside its smaller sibling for the first time was “a very important milestone”, he says, signalling to customers and potential customers that the programme is “in the last lap” and likely to “stimulate more sales campaigns”. Bombardier plans to display the CSeries at Paris in June, its debut at a major air show, although it does not specify which model or how many. “At Paris we will demonstrate how serious we are about the programme,” he says.

Bombardier’s travails do not, of course, just stem from lack of revenue from its flagship programme – under the original schedule, cheques would have been pouring in by now for CSeries deliveries. By investing so much in the new aircraft, Bombardier has left itself unable to develop – beyond some internal tweaks – either its CRJ regional jets or its Q400 turboprop, which is being outsold by European rival ATR.

Equally, on the business aviation side, while its new large Globals – the 7000 and 8000 – will sell well in a niche market, developing the new variants has also drained Bombardier’s cash reserves, and they will arrive on the market later than their main competitor in the ultra-long-range, large-cabin stakes, Gulfstream’s G650ER. Meanwhile, the sluggish recovery of the light to mid-size segments prompted Bombardier to suspend its all-composite Learjet 85 in January, almost a year after its first flight, and has thrown into question the future viability of the whole Wichita-based Learjet business.

Bombardier Commercial Aircraft’s vice president business acquisition Ross Mitchell insists the CRJs remain a strong proposition with production running at about 46 a year, with a backlog of 15 months. The CRJ900 is the workhorse in the USA – because of scope clauses and the fact that most operators stick at 100 seats since going over that requires a third cabin crew member – and makes up 90% of production.

However, with scope clauses being increasingly relaxed, the larger CRJ1000 is beginning to gain traction and Mitchell expects it to make up around a quarter of deliveries by next year. “This is the aircraft that is going to give higher economies to airlines and the ability to offer more classes,” he says. Any suggestion that Bombardier’s regional jets are last-generation is firmly rejected by his boss, Arcamone. “We are constantly doing tweaks on the aircraft. We want to dispel some myths about it,” he says.

Similarly, Arcamone says creative solutions for the Q400 are a better strategy than developing a larger turboprop – a route ATR appears also to be veering away from. “There is no need to stretch the Q400,” he says. “The aircraft, like all our products, has an enhancement strategy which is driving new interest from customers.” Among these ideas are a cargo-combi version of the aircraft and an 86-seat option pitched mainly at the Asian market. “In Asia, it’s all about high capacity. We think this is the answer to our competition there,” he says, predicting a “breakthrough for sales” this year.

Of course, no-one expects aerospace executives to be anything less than upbeat about the prospects of their products, but the fact that the CSeries – a programme on which the whole future of Bombardier is likely to depend – is finally on the way to making money will be causing considerable relief in the corridors of Mirabel and Dorval. To paraphrase Churchill, having both CSeries variants in the air and production aircraft nearing completion may not be the beginning of the end of Bombardier’s woes, but it looks like it may be the end of a very troubled beginning.