ANALYSIS: Can infrastructure catch up with Turkey's burgeoning air transport?

Arrive at Istanbul’s Atatürk International – all too often after passing time in a holding pattern over the city’s western reaches – and you get a clear impression of an infrastructure straining to accommodate the ambitions of the country’s aviation sector. The gateway to Turkey’s biggest metropolis does not have enough gates and aircraft frequently have to park on remote stands. Surrounded by housing and businesses, expanding the footprint of Europe’s fourth-busiest airport has proved tricky.

The reason is twofold. A decade of strong economic growth and the deregulation of its airline industry in the early 2000s has created a boom in air travel, from Istanbul and other cities. Meanwhile, partly state-owned flag carrier Turkish Airways has taken on the Gulf carriers at their own game with a successful hub and spoke strategy based on Istanbul’s centuries-old favourable location at the crossroads of Europe and Asia. 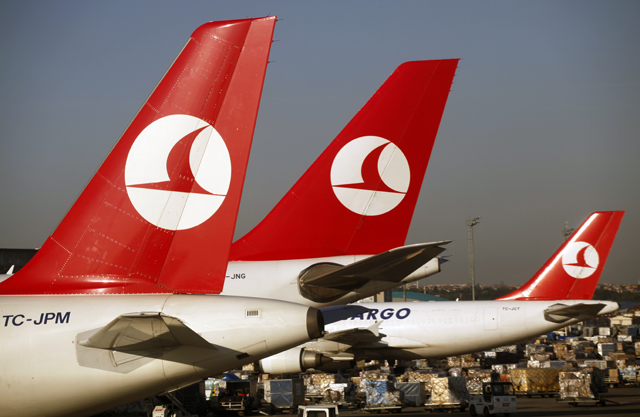 As a result, Turkey’s commercial aviation fleet has grown from around 160 at deregulation to 431 today, while passenger numbers have trebled to 81 million. The country’s airlines have 337 aircraft on order – 213 of them destined for Turkish Airlines. Although Turkey has a population of only 76 million – roughly comparable to Germany – its relatively late start in aviation and extensive catchment area has made it one of the industry’s most lucrative markets in recent years.

The Turkish government is tackling the infrastructure lag with plans for what will eventually become the world’s largest airport, catering for 150 million passengers per year. Construction work has already begun in an area of forest north of Istanbul. The first stage, capable of handling 80 million passengers – one-third more than current numbers at Atatürk – is due to open in late 2017. However, there is scepticism, given delays to other high-profile airport projects, that this schedule will be met.

After a doubling in the number of airports to 52 over the past decade, the government has also looked at building more to ensure that no citizen is more than 100km (62 miles) from one – a tall order considering the low population density in remote parts of this large country. But Istanbul is where the most pressing demand for capacity is; the city’s only other airport, Sabiha Gökçen – on the Asian side of the Bosphorus and home to Turkey’s second airline Pegasus – has also expanded rapidly.

Despite an advertising campaign involving some of the world’s best-known sportsmen, Turkish Airlines’ emergence as one of the world’s biggest airlines in recent years has been a bit more under the radar than the headline-grabbing prominence of the big three Gulf carriers. Turkish Airlines how claims the distinction of flying to more countries – 103 – than any other airline, and in 2015 aims to increase its capacity by 15% and passenger numbers to 63.2 million.

Its fleet profile is different to the Gulf carriers too, with a larger proportion of narrowbodies, mainly because its many destinations in Europe and the former Soviet Union are within short-haul reach – of its 254 passenger airliners, 199 are narrowbodies. By the end of 2015, says the airline, its fleet will reach 293 aircraft, with 214 single-aisles and 68 widebodies. And unlike the Arabian airlines, it has a large domestic network, with around two-fifths of its passengers travelling within the country.

The airline’s recent orders included 82 Airbus A320s and 35 options, as well as 70 Boeing 737s with a further 25 options – an order which includes up to 75 of the re-engined Max family. The carrier’s fleet is split roughly equally between Airbus and Boeing, with 91 A320-family aircraft and 35 A330s, together with 109 737s and 18 777-300ERs. Turkish also operates a small fleet of Airbus widebody cargo aircraft and three Embraer 170s.

Turkish Airlines’ dominance and impressive growth has somewhat overshadowed the success of the country’s other carriers since deregulation, particularly low-cost carrier Pegasus, which is waiting to see whether it wins new traffic rights to countries in the former Soviet Union, the Middle East and North Africa before deciding to exercise options on dozens of aircraft. The privately owned carrier says it has long faced a struggle to be taken seriously by the government.

In December 2012, Pegasus placed what was then the largest airliner order in Turkish history for 75 Airbus A320neo family aircraft – 58 A320neos and 17 A321neos – plus 25 options. The first seven aircraft are due to start arriving in the second half of 2016, with deliveries continuing to 2023. Pegasus, which launched its expansion drive under new ownership 10 years ago, has a young fleet of 58 aircraft, 52 of which are Boeing 737-800s. 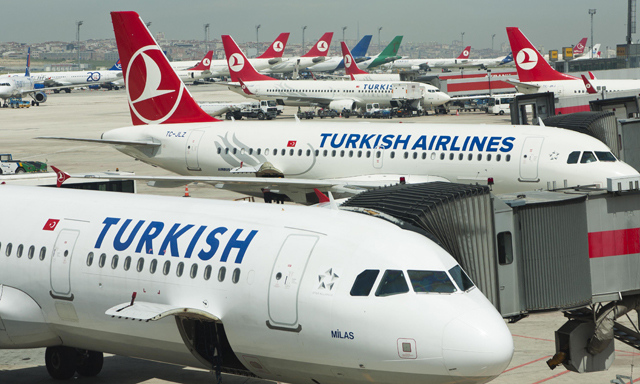 If the airline is cleared to launch enough new routes it will keep many of its current aircraft, as well as the new Airbuses, giving it a fleet of as many as 127 aircraft by early next decade, chief executive Sertac Haybat tells Flight International. However, if fails to be granted sufficient bilateral rights it will divest most of its existing aircraft and surrender its options, leaving it with 75 new Airbus narrowbodies in 2023. “This is the flexibility we have and where we need to be,” argues Haybat.

Since launching scheduled services in 2005 – its first 15 years were as a charter carrier – Pegasus has battled for rights to fly certain international routes governed by bilateral agreements. Its foreign presence has grown – it has 59 routes beyond Turkey. However, Haybat maintains overseas opportunities are hard to come by. “We are trying to get into North Africa, the Middle East, the CIS, but there are many bilateral issues,” he says. “It’s a painful process, but we will keep fighting.”

In Europe, the situation is different. Liberal environments throughout most of the continent have allowed Pegasus to develop an extensive network – particularly in Germany. “We have Europe pretty much covered – except for a couple of countries we are not restricted – so we will add more frequencies. This summer, for example, we are introducing six flights a week to [London] Gatwick,” says Haybat in an interview at the carrier’s modest headquarters near Sabiha Gökçen.

He adds: “It is not easy for us to grow internationally. On domestic, it is almost a liberal market, but Turkish Airlines dominates the bilaterals in the Middle East, Russia and North Africa, and this limits us. All these bilaterals are being enjoyed by Turkish Airlines and there is no transparency over the process of how they are distributed between airlines.”

Establishing itself at Istanbul’s Sabiha Gökçen – then a barely-used, single-runway former military facility on the Asian side of the city – allowed Pegasus to grow almost by stealth. “At the beginning Turkish [Airlines] didn’t notice us. As we were flying [scheduled services] from Sabiha Gökçen, nobody believed we would be a success story,” he says.

Following liberalisation of the Turkish market, Pegasus, along with a number of other carriers, launched scheduled domestic services. “We were the fifth airline coming into the Turkish market. We had around 6% domestic share in our first year. Now it’s 28% to Turkish Airlines’ 53%. We are by far the second carrier in Turkey,” says Haybat.

The choice of airport was crucial to Pegasus’s success, says Haybat. “The reason for our exceptional growth was that we started with the right model at the right airport. Sabiha Gökçen was deserted in 2005. Half of our launch campaign was to promote the airport.” Divided by the Bosphorus, Istanbul is in effect two cities, with the Asian part comprising a catchment of 9 million people, he says.

Such was Pegasus’s success in creating its new hub that Turkish Airlines two years ago established its own base at Sabiha Gökçen. “They announced they will not repeat the mistakes of the European legacy carriers, so they started competing directly against us from here,” he says. Pegasus, says Haybat, now has a 65% share of traffic from the second Istanbul airport.

While it does not compete with Turkish Airlines on long-haul, Haybat insists Istanbul’s “strategic location” allows Pegasus “meaningful connections” to important population and business centres with its narrowbody fleet. “We can reach all European cities, all major Russian cities, most of central Asia, all of the Middle East and most of North Africa,” he says. 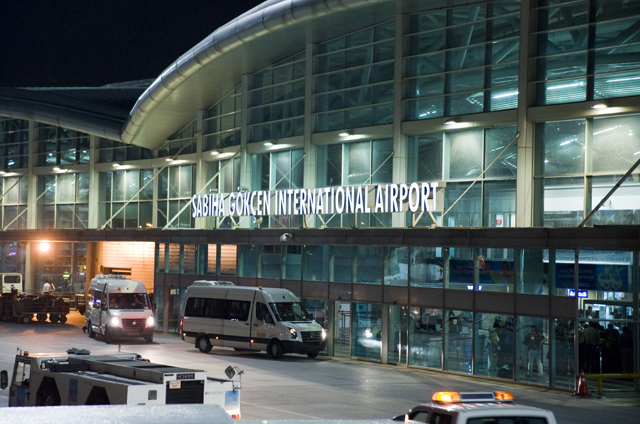 One of Sabiha Gökçen’s advantages is its 24-hour operation, says Haybat. This allows Pegasus to fly to the east during the night and in daytime to Europe, where night-time restrictions apply. A proposal to build a second runway at Sabiha Gökçen would give Pegasus room to expand, and means it would not have to consider relocating to Istanbul’s planned new third airport, he says.

With its European routes established, Pegasus’s main opportunity is now to the east. Whether its ambitions are realised – and these new aircraft join rather than replace the existing fleet – depends on the attitude of the government, says Haybat, an aviation veteran who has worked for Turkish airlines and has an engineering degree from Manchester University in the UK. “In an ideal world, we will be flying more to the Middle East, Russia and North Africa,” he says.